Okay, so I have already accused Chrystia Freeland of treason by virtue of her being in the same bucket of constitutional crime as Justin Trudeau, and part and parcel of his vision for a financial global reset and a world dominated by the World Economic Forum. Madam Freeland sits on the board of the WEF and shares the same vision of a world run by a special handful of special people as they vision themselves to be . They share the same contempt for common Canadian citizens who need to be thinned out, in their opinion, as “useless eaters”. But who is the third Treasonous Amigo in Canada who is in the process of giving Canada away to the most evil forces of globalism, wokeism, fascism, and the financial ruin and planned destruction of Canada ? Do you know? Of course you do. It’s the NDP federal leader Jagmeet Singh.

It is Singh who is holding tightly to the entire stinking mess of Trudeau’s policies. And it is Singh who like any accomplice in a murder charge, must eventually be held accountable for the death of Canada as a sovereign nation if this does indeed occur. Jagmeet Singh thinks that his fame and fortune lies with gluing himself to Justin Trudeau. Bing a trembling weak puppy himself he thinks by gluing himself to Justin, whom he sees as being strong and rich and in with the world’s strongest and wealthiest people, that this strategy will lead him and his party to being winners with Justin Trudeau. He has no notion that this strategy may wind up with him sanding next to his beloved Justin in the gallows, at least figuratively speaking. But they will all three go down together, drowning in their Just Transition, wokeism culture and total financial ruin of Canada. Why do I think this?

Because something has already transpired that makes these three guilty of high crimes of treason. And what is that? Well, a follower’s long email with attachments told me of something that I haven't even been aware of, that answers most the questions I have wondered about lately. It didn’t make sense to me that Justin Trudeau seems so oblivious to the anger that he is stirring up among the Canadian people. This email I speak of explains Justin’s behaviour. He doesn’t think he will ever have to face Canadian voters. Within three years Justin Trudeau believes that Canada will no longer be a sovereign country. In fact, Canada will have no borders. Why does he think this? Next time. 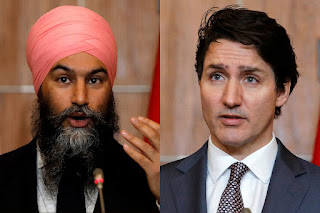 Posted by Betty Krawczyk at 6:23 PM No comments:

Betty Krawczyk here. This will be my third post on reasons that I think Justin Trudeau and Christa Freeland could and should be charged with treason. Some people may wonder why Justin Trudeau acts so cocky as he flings down more orders from on high from his throne in Ottawas as a royal should, orders that land squarely on the increasingly bowed shoulders and along with increasingly hungry bellies of his perceived subjects below him. It is becoming obvious that this self centred boy in a man’s body doesn’t care about the people he was elected to serve. But why doesn’t he care? After all, the citizens who voted him in can vote him out again.

Good question. But the answer is beginning to seep into Canadian brains in spite of ourselves. The answer to why Trudeau doesn’t give a tinker’s dam what Canadians think of him is because he knows the gutless NDP is welded to him until the end of his term. Why, in his remaining two years to serve Justin Trudeau together with his deputy prime minister and finance minister Chrystia Freeland, will have plenty of time to finish wrecking the country’s farming capacity , power supplies, kid’s education, jobs, and the entire economy.

Trudeau and Freeland are both favoured new leaders of Klaus Schwab of the International Monetary Fund. The IMF will be coming to us soon under the guise of the Great Reset. This is happening now, as central banks are trying to destroy the use of cash so people will be ready, when the banks are failing and supply chains are sufficiently destroyed, to turn to Klaus Schwab and Bill Gates and their wet dreams of total control of western countries’ populations . What a gig for Trudeau! A stage as big as half the world to sing and dance and act on to his heart’s content without having to pretend he even knows where Canada is.

But Canadian citizens may not slip so easily into that dark night. Many are fighting back.

I believe that Prime Minster Justice Trudeau and Deputy Prime Minister and Finance Minister Chrystia should be charged and convicted of treason because of their adherence to the powerful international foreign body of the IMF which seeks to overthrow the Canadian Constitution and Bill of Rights which enshrines the sanity of life, the protection of citizens and families, freedom of speech, freedom of religion and the rule of law with foreign values and a foreign currency that do not represent Canada nor the Canadian people. 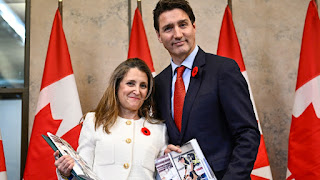 Posted by Betty Krawczyk at 6:11 PM No comments:

Hello, Betty Krawczyk here. This will be my second posting on why I think Justine Trudeau and his Deputy Prime Minister Chrystia Freeland could and should be charged with treason. My last post concerned Canadian farming and Trudeau’s passion to reduce crop yields by one third by issuing policy restrictions on fertilizers along with inflationary prices. Many farmers will go bankrupt. This of course will mean a restriction of our Canadian food supply which is a giant leap toward the IMF goal of depopulation, a goal to which Trudeau is devoted. Depopulation of what or whom? Of humans, of course.

And together they have decided, after careful consideration, that there are two dam many people in the world. The solution? Get rid of as many of them as possible as quickly as possible. And of course, refusing to allow farmers to grow food is one sure way. Another? Well, let’s see. How about expanding the uses of Bill C-7.

Bill C-7 is the government assisted suicide bill. This bill has been expanded now so that Trudeau’s government can include citizens who have Alzheimer's and people who are handicapped but in no danger of immediate death from their handicap or anything else. It seems that veterans are being subjected to suggesting from medical superiors at Veterans Affairs that they consider the new expansions of Bill C-7, and just off themselves. Easier, you know, than trying to live with missing limbs or messed up backs and internal organs. This is being argued in Parliament with Trudeau denying his government is targeting veterans but with clear evidence from the veterans themselves that they have received these suggestions. And Alzheimer?

Oh, my God. There have been supposedly responsible studies referred to by gerontologist (people who study the elderly) and report that almost all old people if they live long enough, will have some form of dementia. I think most elderly citizens fear Alzheimer's more than any things else even though more old people are now living healthy lives well into their old age.

But how easy would it be to persuade a frightened elderly man or woman that their occasional forgetful lapses are the onset of Alzheimer's and perhaps should take advantage of Bill C-7 as it will be all downhill from this point on. And the expansion of this bill , in my opinion, is another reason for the charge of and conviction of, the charge of treason against Justin Trudeau and Chrystia Freeland.

On what charges? On the facts that Justin Trudeau and Chrystia Freeland have turned their back on their duties to protect the sanctity of life values that are held by the vast majority of Canadian citizens and by adopting foreign values from foreign states and organizations and have instead instituted these foreign policies and values into the Canadian government that are destructive to Canadian values and Canadian lives in this government in order to appease foreign interests. This is treason. Next time. 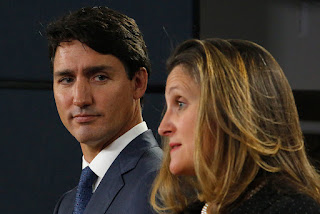 Posted by Betty Krawczyk at 5:49 PM No comments: