China has Russia's Back


China has Russia’s Back
I think our Western leaders are getting stupider by the hour.  They carry on about Russia and what they are going to do to punish Putin for being concerned about Russia’s borders.  It’s as though the West (US and EU) have every right to agitate unrest in Ukraine by siding with neo-fascists and then complain when Putin says no, you  (US and EU) are too close to our borders with your planned NATO bases.  You will not encircle us. We will protect our borders from US militarism at all costs.  And of course the US is thoroughly offended.  As if they would tolerate Russian bases in Mexico or Guatemala.
And the West seems terribly oblivious to the fact that China has Russian’s back.  While China has been exceedingly low key (China says little, but carries a very big stick). she has supported Russia in the Crimea and will continue to do so.  This is why, in my opinion, there will be no third world war over the overwhelming Crimean vote to rejoin Russia.  I think the breathless news announcements by CBC of how this is on the verge of starting an all-out war because Putin is a monster for defending her borders against a replay of Libya, Iraq and Afghanistan, and this Russian refusal to be encircled by NATO bases is enough, yes, to start World War Three.  The announcers’ sickening apparent enthusiasm for exciting news to report are ignorant beyond belief.  The reporting in this area is so unbalanced that the CBC reporting should be classified as a war crime in itself.

And notice how Stephen Harper smiles a gleeful little smile every time he talks about how he was the first head of state to visit the rising fascist government of Ukraine after the people in Crimea voted to rejoin Russia?  As far as I know, Harper has been the only head of state so far to visit the Ukraine after the annexation of Crimea.  However, to give Harper credit, he may have been only thinking about Canada.  At least the Canadian Tar Sands. As he has facilitated the gutting out of most manufacturing from Canada, and loathes unions, then the Tar sands are about all Canada has left along with low paying service jobs, to employ large numbers of Canadians.  If Russian oil is disrupted from flowing to Europe (EU gets most of its oil and gas from Russia) then Harper can dream of how clean Canadian dirty oil would suddenly become to Europeans.  Why, the Tar Sands could  sparkle like the sun to Europeans who might get suddenly deprived of Russian oil and gas supplies.  So this makes Harper smile as he boasts of how he has stepped up to the plate and cut off all communications with that blackguard Putin. But I think this is a gross miscalculation on Harper’s part and not worth the votes he is counting on from Ukrainians’ in Canada.

Russia and China have just signed a deal that will see much of Russia’s oil going to China.  This will lessen China’s interest in Canada’s tar sands.  The US is rapidly becoming oil and gas self- sufficient.  It will take time for the EU to find an adequate replacement for Russia’s oil even if it should decide to do so, and in the meantime, the global economy is faltering.  Betting the entire Canadian farm on Alberta’s tar sands is, in my opinion, dumb.  And Harper, in thinking the US will appreciate his efforts to play big time bully by cutting off communications with Russia is dumb.  His thinking that the Chinese will turn to Canadian tar sands as their primary source of energy when they are making plans for huge imports of Russian oil is dumb.  And trying to agitate for more disruptions in Ukraine by praising the neo-Nazis who care nothing for democracy and freedom of speech is dumb.
For instance the recent beating of the CEOof Ukraine’s national media service

The increasingly hostile situation between Russia and Ukraine has claimed its latest victim, a far-right Svoboda party ideologist.
Shoving, name-calling and taunting Panteleymonov, the politicians forced the media CEO to sign a letter of resignation. Continuing their belligerence, they then posted a video of the incident online.
CEO of Ukraine's national media service. A violent video surfaced earlier this week, revealing several thugs harassing and throwing around Aleksandr Panteleymonov, the acting CEO of Ukraine's National Television Company. The perpetrators? A Ukrainian member of parliament. (end of section of accompanying article to image on RT).
But the West’s dumbest thinking was that China would  set still for the US to install NATO bases along Russia’s borders.  China has Russia’s back.  Neither China nor Russia will tolerate NATO bases on or close to their borders.  And China’s big stick includes the fact that they own much of US debt.  If things get really sticky China could seriously dislocate the entire Western economy.  This is why the West can’t start bombing Russia the way it does other countries who have oil the West covets.   China has Russia’s back.   The West and the global bankers are not suicidal.  They prefer to continue squeezing wealth out of the working class rather than risking it all by agitating China.  There will be no third world war.  At least not any time soon.

Posted by Betty Krawczyk at 7:55 PM No comments:

Posted by Betty Krawczyk at 7:47 PM No comments:

Stephen Harper seems to have us all hog tied and ready for market.  Yes, we’ll all be lined up and accounted for to accommodate the signing of the free trade agreements and the sell-off of our natural resources. The legalities will all be in place to silence Canadian scientists, environmental agencies and First Nations objections.

Harper’s got that covered, too, with his new Citizenship laws.  At least this law would affect activists like me who hold dual citizenship (US-Canadian).  Of course the law reads that one would have to be guilty of “terrorism” to be stripped of one’s Canadian citizenship.  But who defines these days what “terrorism” means? The government in charge, of course, both at home and abroad.  I have already been compared by the Crown of BC to violent pedophiles who reoffend because I often practice civil disobedience in defense of BC forests.  In the Eagleridge Bluffs aftermath the crown submitted to the court suggestions that I be sentenced as a incurable repeat offender.  And even if citizenship matters do come under the head of immigration instead of the Supreme Courts of Canada we all know that immigration is not independent of the Harper government.

I believe Stephen Harper intends to cram pipelines down our throats, with the Christy Clark provincial government steering the destruction, of course, with both the major Kinder Morgan and Enbridge pipelines along with Keystone XL ( I believe Obama is going to approve this) through Alberta and Saskatchewan.   With environmental groups and environmental scientists silenced, and people like me softened on the side lines, Harper thinks in the long run he can just buy off First Nations or bully them into submission.  Well, I don’t know about that.

It is becoming clearer that both the US and Canada are quietly becoming quasi-fascists.  How can this happen in democratic countries where the Jewish Lobby wields so much influence in both countries?  I believe patriarchal religions cloud the mind and wipes out the concept of citizenship.  For instance, Stephen Harper took an enormous delegation of rabbis and other influential Jewish people with him as well as cynical politicians when he visited Israel recently, thus positing Canada solidly in the Jewish camp.

However, Stephen Harper is also presently acting as the bad cop for the Obama administration in trying to present Russia as a demonic threat for giving the people in Crimea a choice of their future (which they have just taken advantage of by voting to join Russia) while the US is busy supporting and engineering the pro-fascist government in the Ukraine.  According to some news reports, already many Jews are leaving the Ukraine because of the swastika signs painted on their synagogues and threats of violence to their persons.  Israel is certainly aware of these neo-Nazis in the new Ukraine government but raises no objections. Netanyahu’s hatred of Syria and Iran is so overwhelming it evidently tops any worry about the rise of fascism in the Ukraine, or anywhere else.

Stephan Harper’s fervent support for Israel no matter what they do is not just a favor to the Jewish lobby in my opinion, but religion based.  Harper believes literally in the Bible which is why he can’t tolerate scientists.  And the Bible suggests that Israel must be in a fiery conflagration before Armageddon can happen and Jesus can come again.  In my opinion, we are living in a country where political decisions are being made to facilitate the necrophiliac religious fantasies of our leader and forwarding the specter of an all-out third world war.  So we have this situation where our prime minister clings to Israel no matter what that government does, while abetting and abating the rise of fascism in the Ukraine.   With his particular mind set and religious beliefs, tearing up Canadian earth, water and air with pipe lines, fracking, and tanker traffic from tar sands does not present a contradiction for Stephen Harper. It’s all good. 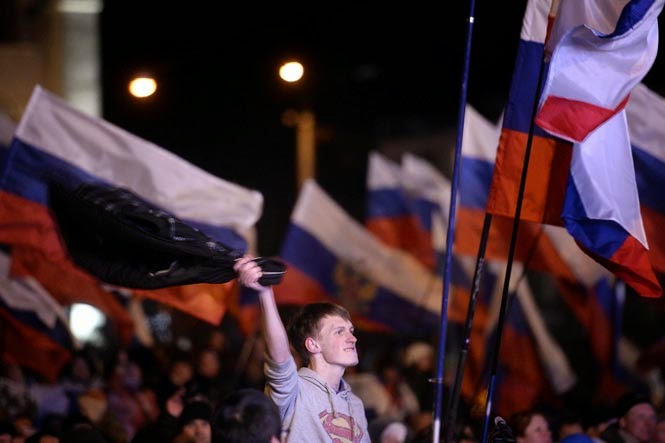 But it isn’t all good. We, as citizens know it isn’t all good.  Or even partially good.  And we have to ask ourselves…what is the duty of citizens when our governments become incapable of choosing between right and wrong?  Do we abdicate our responsibility as citizens?  Or do we resist?
Posted by Betty Krawczyk at 5:00 PM No comments: