MOTHER EARTH AND MORALES THE DEFENDER 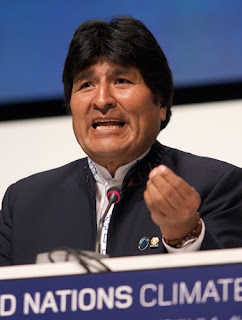 Mother Earth and Morales the Defender
Democracy Now reports how Evo Morales, President of Bolivia, addressed a world referendum in his country on the effects of global warming (April 21, 2010) and Morales’ words stunned me with their truth and purity. And just in time. For me, too many pieces of the puzzle were missing. Like why, oh why, do our own leaders highjack any real effective climate policies? And President Morales, an indigenous man of the people formulates a simple answer; it’s because the only free thing our western leaders believe in is the free market. And in this free market so beloved by our government leaders and corporations lurks the vehicle which stupefies the body politic. And what is this major vehicle? It is the stun gun of capitalism which dictates that the personhood of corporations tops the personhood of real persons.
The superior personhood of corporations is truly a remarkable concept. It’s why Stephen Harper can treat us like idiots. Why he can act like a god with no superior on earth or in heaven. Why Gordon Campbell can preach family values while living a double life; why these men feel protected by all of the forces of the universe. It’s because they consider themselves part of the clique of the superior personhood of the corporations and furthermore, they revel in it. These men also know that the mother of all corporate personhoods, the private banks of Canada, at least in practice, trumps Mother Earth and all of nature. How? By drowning us in compound interest. Compound interest charged by private banks keep the rich shrieking in glee and the rest of us scratching. But it has always been this way, hasn’t it?
No. We actually have a public bank. It’s called the Bank of Canada. It has the power to loan money to the Canadian government for all public expenditures. Without interest. Instead, at corporate insistence, the Bank of Canada loans the money (taxpayer’s money) it takes to keep our country going, directly to the private banks first, who then loans it back to the government. And not with simple interest, but with compound interest. So instead of taxpayers just paying directly for the government expenditures (transportation, infrastructure, and federal programs) we must also pay this original loan with compound interest. And all this compound interest money (taxpayers money again) of course now belongs to the private banks. This is why the private banks are so very rich and getting richer. And it’s a global phenomenon. In order to pay back monstrous debts of compound interest governments have no choice but to give way to the bank corporations on all levels, environmentally, socially, and financially, just as at the moment, Greece is in the process of capitulating unless the people find the guts to revolt. Bolivian President Evo Morales says the real enemy of Mother Earth is capitalism. I agree.
Posted by Betty Krawczyk at 6:08 PM 1 comment:

HOW TO JUDGE A MAN'S METTLE? 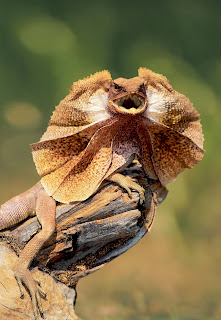 True Indication of a Man’s Mettle?
How to judge a man’s mettle? Like the mettle of our premier, Gordon Campbell? In several ways. Take our west coast old growth rainforests. Where have they all gone? It seems to the logging corporations. These forests were at one time public rainforests. Now they are mostly corporate logged out lands just ripe for private development. But how do public lands become private developments? By orders in council. With just a few swishes of the pen by Gordon Campbell along with whomever is wearing the hats of forest or environmental minister at the time, men mostly ignorant of and disinterested in nature, as Gordon Campbell himself is. Another way to judge a man’s mettle?
By the way he treats women. Remember how Mr. Campbell dragged his wife out to front for him when he was convicted of drunken driving? What woman can forget that look on Mrs. Campbell’s face as she stood by her husband’s side, staring blankly into the cameras? And as far as I can determine, Mrs. Campbell hasn’t been seen publicly with her husband since. And it’s been years. Nobody talks about this. I wonder why? Isn’t a premier’s martial status a subject for public discussion? It is everywhere else in the world among politicians. This isn’t just lust for gossip, it’s because there is some sense among the general body politic that the way a man treats women, whether they are wives or current or past mistresses, indicates in some measure his very capacity for love and tenderness and fairness.
Okay, so maybe I am reaching here, but if the premier of this province doesn’t love or treat his wife fairly but pushes her out on the stage when he is in trouble, how can he be expected to love and protect our trees? Or our water? Our grizzly bears? Our wild salmon? Our children of whom one in five is below the poverty line? Our democracy? Our jobs? I wish Mrs. Campbell would come out on the public stage and speak to us. After all she is still, as far as any of us are aware, the First Lady of this Province. Maybe she could give us some insight into why her husband, who is supposed to be a businessman, is literally giving away our province for practically nothing.
Posted by Betty Krawczyk at 5:35 PM No comments: