Fairy Creek, the Sierra Club and the 'No More War in the Woods' agreement

In this video I discuss the Sierra Club and the legacy of the 'No More War in the Woods' Agreement in relation to Fairy Creek.

Posted by Betty Krawczyk at 8:44 AM No comments:

In this video I discuss issues of RCMP brutality and arrests and the role of the Great Bear Rainforest Agreement affects the current situation.

Posted by Betty Krawczyk at 11:28 AM No comments:

The Defense of Necessity

In this video I discuss the legal 'The Defense of Necessity', where one can claim that the law that was broken was done to prevent a greater harm.

Posted by Betty Krawczyk at 10:55 AM No comments:

NPR. Trees Talk To Each Other. 'Mother Tree' Ecologist Hears Lessons For People, Too.

Posted by Betty Krawczyk at 4:56 AM No comments:

Cleaning up our own backyard: Forestry, mechanization, and the Gulf Stream

The forestry struggles continue in Fairy Creek as the forests burn in many places over the North American continent, facilitated by the residue left behind from corporate logging. When I first became aware of the massive corporate clear cutting that had gone on in Clayoquot Sound 25 or more years ago, I was shocked.

I was living in the Sound at the time. I had more or less just arrived, still dizzy with the natural beauty of the place. Slowly I began to realize that the massive greenery on the mountains behind my cabin weren’t new trees but new brush. When the winter rains began, I was even more shocked to learn the new brush wasn’t strong enough to halt the massive landslides on one side of the mountain. I’d never seen anything like it in my life. I began reading about clear cutting and talking to people. 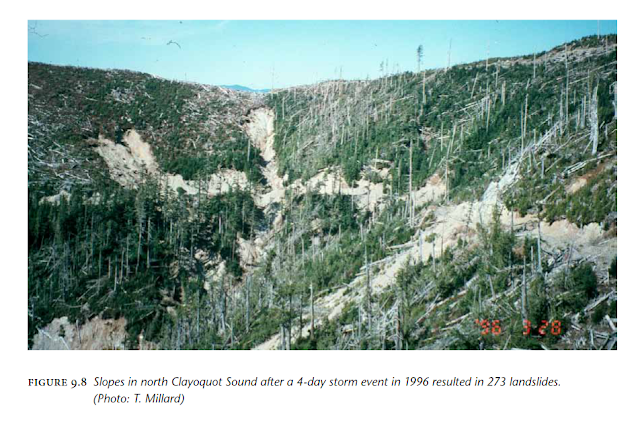 I was told by members of Friends of Clayoquot Sound that it wasn’t just the removal of the trees that destroyed the integrity of a forest, but also the amount of machinery involved in the work. Since the late 1940s most of the logging companies in BC have become increasingly mechanized. Several loggers told me that they themselves had grown more than a little uneasy over the ever-increasing amount of mechanization in the corporate logging process. Their unease was somewhat different from, or perhaps in addition to, those simply trying to save such a rare, incredibly beautiful place for posterity. Every time a new machine or new addition to an old machine was implemented, this meant fewer loggers would be needed. Each new machine or addition would mean less jobs as the purpose of each machine was simply that...to take the place of humans. I was told by older loggers that there had been push back from some of the men, and there had been struggles in the union over the issue. However, that particular struggle seemed to be over. The men who still had jobs just wanted to hold on to them.

The new innovative machines were far more efficient...like the Harvester PONSSE Bear C6, also called “a forest clearing monster”, with champions proudly proclaiming that it allows “a forester to do a day’s work without ever breaking a sweat”. 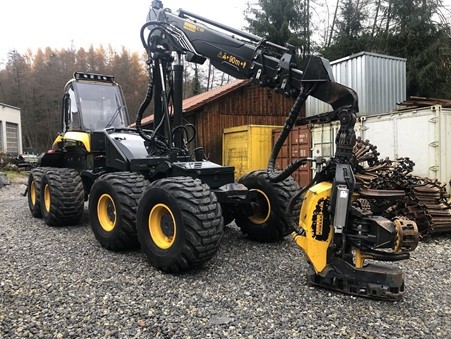 This machine is incredible. Its efficiency takes one’s breath away. It uproots trees, scrapes off the limbs and cuts them into required lengths all in one fell swoop. Other clear-cutting machines include 'bunchers' that can grasp multiple trees together for cutting, grapple yarders, and massive skidders. All of these weigh tons, tearing up the forest floor, as they are moved, installed and as they drag tons of timber along with them. Then there are the stump grinding machines and the woodchippers. These are just some of the earth and job-destroying machines used in commercial logging.

Clear-cutting dries the land, invites landslides, and worst of all, facilitates devastating wildfires. But it’s not just about us here in B.C. Our forestry practices and resulting wildfires are made worse – and contribute to – the rapid climate changes and extreme weather we are all increasingly becoming concerned about and having to live with. The emphasis on mechanization and logging machines I’ve been talking about are therefore directly connected to the most recent news about the possible collapse of the Gulf Stream which will affect hundreds of millions of people due to desalination from the warmer temperatures melting vast amounts of freshwater.

We are living in the legacy of the machines we use to increase efficiency, so that we can consume more, and that the ravenous thing called ‘the economy’ can continue to be fed and grow, without seeming end. But we cannot ‘innovate’ our way out of this with more technology and mechanization. While you may think the Fairy Creek protestors can’t change the whole world, they are showing us that we can take on the responsibility to clean up our own practices in our own backyard.

Posted by Betty Krawczyk at 6:16 AM No comments: