Truth Floods Into The Comox Valley 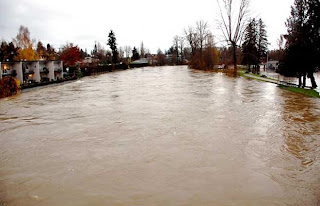 Presently residing in the Comox Valley, I was struck by a letter to the editor by Mr. Rick James in the Comox Valley Record (Jan. 7, 2011). Mr. James believes in his own perceptions instead of the lies we are persuaded to believe by government and logging corporations and his letter is a harbinger of hope. Political life has reached the point where many of us are numbed down and dumbed down to the point of no return. And in my opinion there will be no return unless we listen to people like Rick James.
Mr. James suggests that the recent threatened flooding in Courtenay was not due to “natural uncontrolled impacts” as pronounced by Stephen Watson, spokesperson for BC Hydro, but was instead, caused by the incredible amount of logging going on “up along the headwaters of the Valley’s rivers and streams over the past 10 or twelve years”. Mr. James goes on to say the logging is essentially stripping the higher-elevation forests down into a “barren, lunar landscape”. And in turn, is responsible for the huge inflows of water into the Comox Lake reservoir which seriously threatened Courtenay with flooding.
We have to recognize that the courts and the present Liberal government of British Columbia (and their apologists i.e. Stephen Watson) will protect the rights of logging companies to cut forests on hill and mountain sides to the bone even though it will bring massive flooding in the future to the towns below. Consider the flooding of Bella Coola last September and the massive clear cutting around and above the town. Ditto the BC towns and settlements of Port Hardy, Holberg, Kingcome Inlet, and Port Alice who were also terrorized by massive flooding; all were surrounded by clear cuts. In the book COLLAPSE by Jared Diamond (New York Times bestseller) Diamond details the total deforestation of Haiti as the reason Haiti is now a failed state and an occupied state (by US personnel). There is nothing left on Haitian hillsides to catch the rains; their towns and cities are virtual mud holes. Can’t happen here?
It’s happening as we speak. What can stop it? Anger. Enough anger to prompt citizens to start thinking about peaceful civil disobedience, to learn about it, to acknowledge it as part and parcel of the evolution of the law and the Charter and an equitable society. Either we stand up, or stand down. If we stand down our children will inherit scrub grasses, mud holes, ill health and few jobs instead of forests and fish and reasonable economic stability. As a people, we have to make some serious decisions. Our government officials including the courts are too incompetent or corrupt to make decisions for the greater good. It really is up to us. Thank you, Mr. James.
Posted by Betty Krawczyk at 11:21 AM 1 comment: