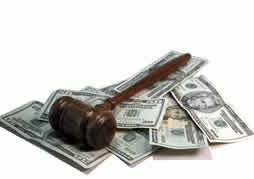 
IN THE SUPREME COURT OF BRITISH COLUMBIA


BETWEEN: HER MAJESTY THE QUEEN

NOTICE OF APPLICATION FOR CONSTITUTIONAL REMEDY

TAKE NOTICE that an application will be brought on behalf of the Applicant to the Canadian Charter of Rights and Freedom to the British Columbia Supreme Court at the courthouse located at 800 Smithe St., Vancouver, British Columbia, on a date yet to be determined at the hour of 10:00 a.m. in the forenoon or as soon thereafter as the Motions may be heard for an Order that:

1. The Applicant claims that by the British Columbia practice of charging exorbitant jury empanelling fees in civil trials that citizens are restricted in their right to access justice. This practice is seen by citizens as injurious to the concept of fundamental justice and was remarked upon by Mr. Justice MacAdam of the Nova Scotia Supreme Court who found the jury empanelling fees unconstitutional because they “put a price on accessing the courts, a price on justice” and declared them unconstitutional in Nova Scotia.

2. The Applicant claims that as she has brought a civil case before the courts in the Vancouver Registry, BC (one charging Conspiracy, Collusion, and Malfeasance of public and corporate officers) that may go to trial, and as she was denied a jury trial in an environmental dispute at Eagleridge Bluffs, BC that resulted in her conviction of ten months in prison because she was convicted of Criminal Contempt of Court for which there is no right to a jury trial, and has, over the years , always denied a jury, served more than three years in the prisons of British Columbia in environmental disputes feels it is unjust that she should now be denied the right to a jury trial in a civil action should it go to court because she can’t pay the jury empanelling fees, which thus restricts her right to justice, even though her case is considered by many to be in the public interest.

3. The Applicant asks that the court strike down the jury empanelling fees in civil cases in British Columbia as the fees give the appearance, and indeed the substance, that justice is for sale in British Columbia, and that they be struck regardless of whether or not the Applicant is allowed to take her case to trial as these fees are offensive to the concept of fundamental justice.

The Applicant is self represented and this Notice was prepared by her.