ideaCity and The Grandmother Hypothesis

The Grandmother Hypothesis goes this way: Remember how we’ve all been taught that man the hunter fed his wife and children even in the earliest hunter-gatherer societies? Well, it doesn’t appear to be so. The truth of the matter, according to current reading of anthropology, is that men probably didn’t even know which particular children were theirs, if any. And making a kill of any wild animal was a dicey thing in those days. Often the men didn’t bring anything back to the clan. And when they did it was shared with the clan as a whole. So the daily feeding of children which centered on gathering wild tubers and berries and bird’s eggs, was left to the women.

The anthropologists who first brought this theory forward looked at calorie requirements. They calculated how many calories a young early hunter gather woman needed per day and concluded that this young woman could gather enough calories to feed herself, and could feed herself if she became pregnant, and even with a suckling infant manage to feed herself. But when the infant became a toddler and the young woman found herself pregnant again she could not feed herself, a baby, and an older child. She had to have help. Enter Granma

Medical scientists, people who study the human body and evolution, still being mostly male, have long wondered about human menopause. What was it for, they wondered? It had to be important, because it was unique among the animal kingdom and every human woman who lived long enough had menopause. And no other animal lived so very long after the reproductive process was finished. In all other animals the individual female died as her reproduction process stopped. The scientists largely decided that menopause must be a relative new thing in woman because they thought in the past human females also died when they stopped being reproductive.

Not so, we are told by the Grandmother Hypothesis. In fact, it was because of the menopause that grandmothers, still well and hearty, and no longer being burdened with infants of their own, could turn their attention to their daughter’s and nieces’ and cousins’ older children and help provide the calories needed to bring them to adulthood. The menopause was the gift nature gave to the human species that enabled our species to multiply and spread out over the globe. In fact, the entire development and evolution of Homo sapiens has turned over the wheel of grandmothers. Now, isn’t that the darndest thing? 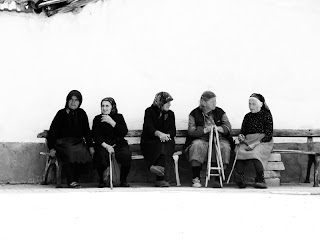 Posted by Betty Krawczyk at 8:33 PM No comments:

Okay, so how can we even think about the fact that four right feet, that’s right, it is now four right feet, mind you, that have recently washed up on Canadian shores. When the fourth foot appeared a couple of weeks ago, complete with running shoe, as were the others, it was news for a couple of days. Police reports were exceedingly cautious about this fourth foot. First, they said there was no evidence that the foot had been severed from the rest of the body. Then they said there was nothing (nothing definite) to connect it to the other three right feet that had washed up before, which evidentially had been severed from bodies. And then this fourth foot vanished from public consciousness.

This kind of thing is painful to think about because as citizens we have no place to put this kind of information. What does one do with this kind of information? Eject it out of our minds, that’s what. And wish the police and media would do the same. We don’t want to hear about it. We want the police to get on with the drug traffickers, domestic murders, and petty criminals. And tend to a couple of rather violent municipal political politicians who are in dire need of anger management.

But still, like the Pickton Pig Farm, this foot thing won’t really go away. Perhaps it’s because on a collective level many of us know, or think we know, what the fourth severed right foot is about. It’s about revenge. Non payment of debt. It’s about drugs. It’s about a sick, drug ravaged world. It’s about depression so rampant that it touches every aspect of our daily lives, lives we live now where pornography and human trafficking have become so common place they’re mainstream, where a popular rock band can call themselves the New Pornographers and be played on CBC (which begs two questions, what happened to the Old Pornographers and as the new ones are actually pretty lame as musicians, would they be played anywhere except for their titillating name?) where drug addictions, to both street and prescription drugs, are reaching mammoth proportions, where hunger and homeless is stalking the streets, where ugliness is the new beauty, greed the new respected value, selfishness the universal North American principal, and where the mother principal of care and nourishing has been almost totally eradicated in our culture. It is only in this kind of culture that can breed a willingness to look away from the severed feet that has washed up on our shores, and to think, however privately, or maybe even out loud, that their owners probably got what they deserved.

But they didn’t. Nobody deserves to have their feet cut off. Whatever they have done. We are all children of this earth. These men, like the women killed at the Pickton Farm where babies once. Beautiful babies with big round eyes, looking out at the world and their mothers, whatever their failings may have been, loved their babies and even if they didn’t, the universe loved them. Because the universe conspired to bring them here. And each one was unique. Nature only makes one of a kind. Of anything. There will never be any man exactly like the man whose right foot recently washed up on our shores just as there will never be any other women exactly like the women killed at the Pickton Farm. Let us grieve for them. For their uniqueness. And vow to never, ever, accept their deaths and mutilations as the price we have to pay for being okay ourselves. We are not okay. That fourth foot belongs to us all. Betty Krawczyk