Mr. Wally Oppal,
I take umbrage with your denial that you had anything to do with my arrest, charge, judgement and sentencing for my protest at Eagleridge Bluffs. Yes, serious umbrage, Mr. Oppal. In your letters to enquiries from citizens, you pretend that you, the highest administrator of justice in this province, have no responsibility for how the police arrest protesters, while at the same time refuse to use the remedies at your disposal to force police to arrest under Canadian law.
When you first took office you told a reporter that you favoured arresting protesters under injunctions and that you wouldn’t be changing this practice. Are you really claiming now that you don’t see any connection between my hard time 10 month sentence (and Harriet Nahanee’s untimely death) and your injunctions? You know very well, Mr. Oppal, that arrest under an injunction leaves citizens with no legal defense. Of course you do. This is why as Attorney General you favour this method of controlling citizens who protest government actions. You knew very well that an injunction would tangle myself and others up with Madam Justice Brown (or some other equally conservative judge) over the court order itself, instead of allowing us to defend our actions under Canadian law.
You know too, Sir, that Mandamus is a writ that the Attorney General can use to make the police arrest law breakers when for whatever reason the police are reluctant to do so. Mandamus will call for immediate arrest under the Criminal Code. Instead, Mr. Oppal, you encourage the continued practice of discouraging the arrest of protesters lawfully under the Criminal Code, and instead wait for your Minister of Transportation and its contractor (in this case P. Kiewit & Sons) to bring an injunction in first and then arrest.
Why sir, do you prefer this method of arrest? I know the answer as well as you. Because when we are arrested under an injunction we have no defense in court. Absolutely none.
I am sincerely sorry you have prostrate cancer Mr. Oppal. But you aren’t alone. So do hoards of other Canadian men who either have, or will have, prostrate cancer caused, I am convinced, primarily by the environmental destruction and chemical pollution brought about by governments who give free reign to corporations to pollute as they see fit, all in the name of development. And Gordon Campbell’s government is worse than most. There is an epidemic of cancer on this continent. I personally have lost two adult children to cancer. While you are crying for your own cancer, Mr. Oppal, cry for other Canadians too, because as long as the law, law enforcement and governments like yours favour corporate profit over human and environmental health, cancer will increase. Yes, cry for all the cancer victims Mr. Oppal. They are legion. 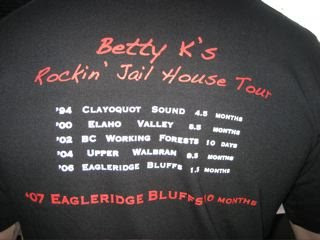 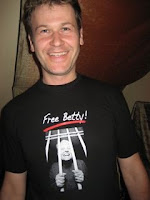 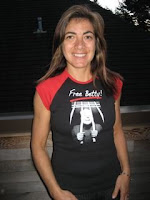 .
Award winning photo by Ron Watts of Saltspring Island.
Hand silkscreening by Andy Sinats in Victoria.
Creative input from Damian Kettlewell.
Design by yours truly.
These 70% Bamboo, 30% Organic Cotton Tee's from HT Naturals have binding on the neck and a cap sleeve.
This shirt is a must have staple that isn't just a fashion statement!
But seriously folks, all sales proceeds will go to Betty's Appeal funds, sorely needed.
The date for appeal is looming faster than we think...
ORDER YOUR LIMITED EDITION SHIRTS NOW!
Prices, including tax, and delivery:
$25 all Bamboo T's.
$20 cotton shirts, while quantities last.
$35 women's long sleeved.
Orders via snail-mail only.
Send a cheque for the shirts, plus any donation you wish to add.
Cheques payalbe to "Betty K Fund".
Remember to include:
1. number of shirts
2. Men / Women / Long (not pictured) for each one
3. Size: S, M, L, XL for each one
4. Cotton ($20) or Bamboo ($25) or Long ($35)
Mail to:
Betty K Fund
Attention: Monika Sheardown
1945 Creelman Avenue
Vancouver BC
V6J 1B8
We will send your T-shirt(s) promptly!
Best wishes,
-Monika
Posted by Betty Krawczyk at 12:11 PM No comments:

Dictated by Betty Krawczyk from Alouette Correctional Centre in Maple Ridge, BC.

According to Province newspaper, April 26th, there is a gender ratio crisis on the Aamjiwnaang Reserve in Sarnia. Situated right across from a chemical plant (Sarnia is mostly chemical plants) the natives of the reserve are wondering if the chemicals being spewed out by this plant have anthying to do with the fact that there are two girls being born to 1 boy on the reserve.
Researchers , the ones concerned wth such things as gender ratio in species, have been worried for some time about the reproduction of the human species.
Historically there are 104 males born to every 100 females. Nature compensates for the high death rates for males in infancy and childhood by giving boys a numerical advantage at conception. However, this advantage is being altered by chemical pollutants.
It is coming to light that the chemical soup we all live in (herbicides, pesticides, plastics, industrial effluent) contain compounds that mimic estrogen. Human males already have all the estrogen they need. More is not better.
These compounds seem to be responsible not only for the 50% drop in sperm count in the last 50 years, but is also affecting chromosomes in the sperm. Researchers tell us that, in general, there seem to be more XX chromosomes in sperm than before, which results in more girls.
The moral of the story? More chemicals means more girls are born. But if pollution is curbed, will the ratio return to normal? Not according to some researchers. They fear these chemicals stay in the human body and are passed on to the next generation. Will our coming generations be composed predominantly of women? And what would that mean to the evolution of the human race? These questions boggle my mind. But this morning I am off to the prison libray, where I have assumed a job of prison librarian.
More later.

If you wish to speak with Betty,
send an email with the day and time that you would like to set for the call.
We will do our best to accomodate you.
Posted by Betty Krawczyk at 2:07 PM No comments: