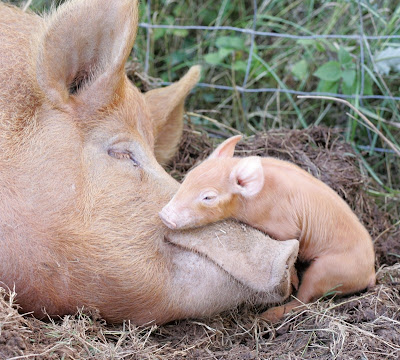 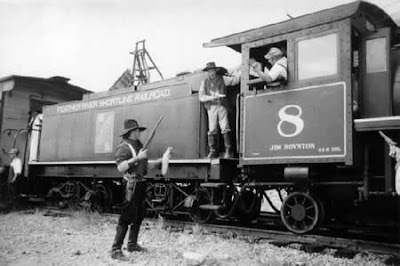 THE POSSES RIDE AGAIN!
Even though I’m pushing eighty and was born into the time of the lawlessness of the Klu Klux Klan, I have never seen a posse except in old cowboy movies. Posse you might ask? Well, a posse is formed when the bad guys get out of hand in this righteous little village and the right thinking sheriff has to deputize some equally right thinking men to go chase down and hang some uppity Indians or black people or cattle rustlers who are causing trouble. Deputizing the white, right thinking men means the newly deputized got to shoot to kill. Didn’t know anything about the law to speak of, couldn’t read or write too good, were drunkards or wife beaters themselves, but give em a gun and some kind of deputizing and by George, they became the knights of justice, equality and protectors of children and women kind.

And it was even better, when they got to stop a train, or chase bad guys through a train. And our modern sky trains are just perfect. While Our newly deputized right thinking men (and somehow a few women have joined the posses) can’t shoot to kill with real guns on the trains (unless a real opportunity presents itself) the stun guns are perfect. The stun guns enable our modern day posses to shoot with a dangerous weapon without enraging the citizenry to the point of revolt. And by George, as any right thinking posse member knows, it feels good to have a weapon that while it may not kill, will certainly inflict damage and it’s a pleasure to have one. Talk about power! Poor people trying to cheat the city of two dollars and fifty cents? Zapp em. Never mind they might actually kill the zapped. The zappers have been deputized, right? They’re good as policemen, right?

In my opinion, We, as a citizenry, are regressing. It is absurd that ill trained people who are not really police officers have the right to use dangerous weapons on poor people with no money trying to get a ride to God knows where. Never mind trying to be a civil city, I would be satisfied if we were just a civilized city. This kind of thing is outrageous, stupid, and cruel. I would like to see the officials who okayed this brutality stand up and offer to experience the taser themselves in order to satisfy the public that being tasered isn’t so bad. I think perhaps the citizenry would pay big bucks to see this, in fact this kind of spectacle featuring some of our more righteous public officials might bring in so much money that the entire down town east side could be rejuvenated.
Posted by Betty Krawczyk at 7:36 AM 6 comments:

Sam Sullivan, My Friend
Yes, Mr. Honourable Mayor, I come in friendship bringing glad tidings. Because it is you, sir, who not only presently holds the keys to the city, but the very key to insure your re-election and make your dreams of a civil city come true at the same time. How? How can this be? Would you not have used such a key before, if it existed, when neither Stephen Harper nor Gordon Campbell would give adequate money for homelessness and affordable housing and you still can’t seem to wring it out of any other source and to make matters worse, there are certain civil and legal groups in the process of bringing this shameful state of increasing numbers of people sleeping in the streets to the attention of the United Nations? This unfortunate mess creates the real possibility the Olympics may go on without you being there, up front and centre. And that won’t be much fun. So how to get out from between the rock and hard place after promising so much and delivering so little?

It’s easy. Truly it is. You, sir, as the main signer (in your capacity as mayor) on the contract with VANOC states there will be no displacement of poor people from their homes which turned out to be a most dishonorable lie. This is called BREACH OF CONTRACT. The hitch is that nobody can sue for BREACH OF CONTRACT who wasn’t part of the contract and who wasn’t directly hurt by the breaching of the contract. You, sir, were part of the contract. You can sue VANOC and the Premier for BREACH OF CONTRACT. Yes, you can. You can claim that you were personally injured by loss of reputation due to the conspiracy between VANOC and the Campbell government’s refusal to live up to their contract which has thrown so may people out onto the streets. Your claim is that this series of events has made you look terrible in the eyes of your constituents and may very well cost you the election. This sir, can be legally described as Conspiracy and PUBLIC and CORPORATE MALFEASENCE to deprive the people of Vancouver of their right to housing and shelters and your right to be seen as an honest and truthful person who believed the promises made by VANOC and the Provincial Government and the promises on the contract you signed. It’s your only hope, sir. If you will do this, instead of running against you for the mayor’s office, I will instead offer my services to your campaign. I will even come help you fill out the Writ of Summons calling VANOC and GOVERNMENT OFFICIALS to court. Think long and hard about this, sir. Yours Truly, Betty Krawczyk
Posted by Betty Krawczyk at 8:40 AM No comments: 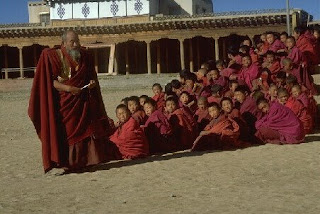 WHOSE TIBET?
The Dalai Lama says that Tibet rightfully belongs to him and the monks and the religious order they represent. He and they want a country separated from China and ruled by their religious order. And large parts of the Western World seem to agree with them that they should have this.
But wait a minute. As I will soon be eighty years old I was living in the times of the Chinese revolution. I remember the Chinese revolution. It started happening just before, during, and right after the Second World War. China then was in pitiful shape. Had been for a very long time. There was no middle class in China during those years to speak of and no heavy industry, or much industry of any kind. Aside from the war lords, noble upper classes, and pirates, nobody had any money. Couldn’t read or write, either. Peasant share croppers they were, only the landlords took more than their share leaving the peasants hungry. Famine was rampant. Women especially bore the burden of abject poverty. They worked in the fields, bore children, were beaten, and if destined for harlotry, had their feet bound that crippled them for life.
And then this revolution started happening. Land lords and upper classes were told to share the wealth and foreign religious orders were kicked out of the country. Everybody was given a chance to reform but if the pirates couldn’t sop pirating they were executed. Suddenly people were learning to read and write, including women and girls. Jobs were opening up in the cities, again for women, too. Female foot binding became a shameful thing of the past. Farming began on a communal basis. Some peasants were taught to be para- medics (only they were called bare foot doctors) and go out and doctor people in the country side. Even though the US and Europe in general boycotted China for having the audacity to have a revolution, China struggled through and gradually built schools, hospitals, fostered art and dance and became the powerful nation it is today.
Is China full of faults? I’m sure. But they seem to keep the country relatively free from corruption and one thing they are hell bent on is keeping Tibet in China. Just like Canada wants to keep it’s Artic claims for Canada. Like Canada resists the notion of Quebec separating. Like people everywhere resists the notion of a country being bound by a certain religion, any religion, like some orders of the Sikhs, Al Qaeda, and Kurds, to name a few who want to overthrow secular states or parts of secular states and impose religious beliefs as government.
In short, I am not opposing the Olympics because I think the Dalai Lama and the monks should lead Tibet into succeeding from China. Tibet now has schools where girls attend as well as boys; people have jobs, health care, and a modern railroad into the rest of China. The Chinese people themselves know this and from all reports are not sympathetic to the Dalai Lama and the monk’s attempts to fracture China.
I oppose the Olympics because they are evil in and of themselves, where they occur they displace people and homes, fracture the local economy, leave an area heavily in debt and take land they shouldn’t as in Campbell’s Olympics here in BC, the taking of Aboriginal land. Yes. They are taking Aboriginal land. This is the main issue.
Posted by Betty Krawczyk at 7:19 PM 2 comments: