Christy, we don't all have Alzheimer's

Christy, we don’t all have Alzheimers.
Christy, your timing is off. Minus a snap election there is a danger that the labour uprising in Wisconsin may come to roost on your new posts. In fact, it may do it anyway. There is the smell of labour renewal in the air. Jim Sinclair’s voice this morning (on CBC) was vibrant as he reminded us of your record as educational minister. Oh, I remember as well as Jim Sinclair, how you tried to bring down the teacher’s union! How you equated the teacher’s union as the enemy of education, and how parents had to scramble to provide the needed supplies you cut back; the school libraries you gutted, the special needs teachers, the school lunch programs, the physical education. However, in my opinion the BC Labour unions have not stepped up to the plate as passionately as they might have. Aside from your own vicious assaults on our education system (especially during the teacher’s strike) there was also under Campbell dictates the disappearance of the IWA (International Woodworkers of America), and the assaults on the nurses union, hospital workers unions, ambulance workers, in fact, practically all of the unions in BC. And you claim to be an outsider? Christy, we don’t all have Alzheimers. I distinctly remember you as the enthusiastic little cookie cutter of Gordon Campbell out to get the teacher’s union.
But there is something new breaking through human consciousness; both near and abroad. This new thing is not just for the wish of it, but for the demand of it, and that is the redistribution of wealth and that includes the wealth of our environment. We all own this land. What right has a few people to claim most of it as their own, leaving the crumbs for the poor and increasing the middle class to fight over? What right has governments to cater to the already obscenely wealthy? What right has our courts to declare that our environment belongs to this class of wealthy to destroy? What right has the wealthy classes to demand the poor become even poorer by trying to break their unions? And to try force everybody into Gordon Campbell’s, and now Christy Clarks, pitiful minimum wage category or contract subsistence?
The unions in the state of Wisconsin are saying no, no way, nada. And this refusal is spreading to Missouri, Ohio, and Michigan. And Christy…as your party journeys ever deeper into Gordon Campbell’s and Kevin Falcon’s Public Private Partnerships, and the consolidation of all our natural resources into one package that can be sold, given over, traded, or simply sucked dry by your in cabinet decisions that will still be influenced by…guess who? Gordon Campbell, of course. But Wisconsin will still be there, too…quivering under the possibility of a true labour revolt. And these other affected US states? They’re not far from our borders. Not far at all. In fact, they are very close. And some of us have very long memories.
Posted by Betty Krawczyk at 10:45 AM 3 comments: 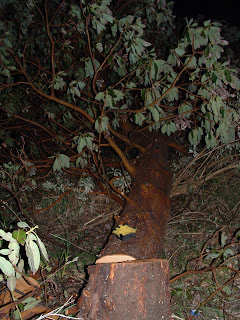 "After the last tree is felled, Jesus will come back."  Who said that? James G. Watt, President Ronald Reagan’s Interior secretary made this assertion before Congress in 1981. So why am I quoting this ridiculous man?  Because while an American, Watt’s remarks serve as something of a warning for Canadians.  James G. Watt was a fundamentalist Christian; one known as a Dispensationalist.   Never heard of them?  Don’t know any?  A Dispensationalist is a member of that segment of Christianity who believes in the “Rapture”, as most fundamentalists do (that is, that Christ will bodily return to earth and believers, living and dead, will rise up to meet him in the air as Christ descends ). This part of it doesn’t concern me.  People can believe whatever they like.  But the other parts of their belief system concern me a great deal.  One main concern is that Dispensationalists believe it pointless to worry about environmental degradation as the end of the world is so near.   Besides, they long for the “rapture” that will come as soon as the world is aflame with wars and evil doing and environmental degradation, then as Mr. Watt said, Christ will come back.  And eventually only the good people (believers, no matter how criminal) and Jesus Christ himself, will abandon the totally shambled earth and rise to heaven.  Our Prime Minister, Stephen Harper, is a Dispensationalist and so is Stockwell Day (The Armageddon Factor by Marci Mcdonald).
So why am I so worried about this?  People have a right to their religious beliefs.  Except when world heads of state allow their religious beliefs to interfere with the wishes of their own people, and/or to enflame tensions in other countries. Stephen Harper does both.  So does Stockwell Day when he gets a chance.  But just how does it hurt other people that our heads of state have certain religious beliefs? Because the ones we have now interpret the Bible literally. And because Dispensationalists also interpret the Bible to mean that the “rapture” they long for can’t come until the above conditions are met plus one more…that Israel has to be in command of the countries surrounding her.  Wonder why Harper can only see good in Israel and only evil in the hearts of Palestinians?  Why he seems totally out of step with the rest of western countries on environmentalism and women’s issues such as his refusal to allow abortion as part of maternal health abroad?  And why he can’t acknowledge that the rest of the world is admitting that Bush’s war on drugs degrades and endangers everybody and are looking at other solutions besides prisons for the addicted and obscene profits for drug cartels that are so readily laundered by our banks?
Canada is beginning to resemble Mexico rather than the US. Obama has had at least a little influence on social and foreign policy for the better.  Harper’s big interest is in convincing people that violent crime is on the rise when it has actually fallen (CBC Current Feb 15) and that we need more prisons. Harper is huge on punishing his own people.   And more prisons would be good for the economy, he figures.  Construction jobs, guards, etc.  And private companies to run them.  And then the prisons will be there, waiting, when Harper’s policies start producing protests that might be a little too hot to handle. And when the last tree falls?  Well, then we’ll get Jesus.
Posted by Betty Krawczyk at 3:34 PM No comments: