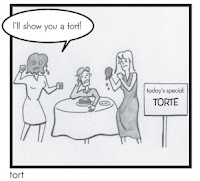 What is a tort? Something that lives in a courtroom and is tossed about by lawyers and judges. Are torts important to the average person? In theory, yes. Like the concept of democracy. But just let the average person try to get into the act of tort tossing or actually try to exercise a little participatory democracy and he or she will find the courts frowning upon them for daring to approach the courts bare faced without a certified tort tosser (lawyer).

It’s galling. Worse than galling. It’s criminal. We citizens own the courts in the sense that we pay for the buildings, the salaries of the court workers in the buildings, including the judges, the services of the crown, and the bailiffs who hold the accused in cells awaiting their turn to see the judge and yet as citizens we can’t defend ourselves or file a suit of our own without access to a pile of money. In a very real sense the provincial government and the court system use the courts and the laws of the court against citizens in appalling ways. And one of the most effective ways is to make us afraid.

Afraid of our own sense of justice, of our own common sense, afraid of losing what little money we live on. The BC courts too often use the mantra of the fundamentalist churches: park your good sense and common notion of justice and what money you may have at the court house door when you step into the courtroom. Here all will worship at the alter of legal precedence, precedences that are totally inappropriate to the here and now, and even debatable whether they were ever appropriate.

So what can we as citizens do? When governments smile and say “green” for the camera while planning more private public partnerships to suck up more public money for greedy developers? Plans that will make more pollution, more traffic congestion, more general depression of land and people and animals?

I hate to say this; it makes my own toes curl. But we have to learn more about the law. As lawyers have priced themselves out of the market (with the exception of a few, very few, super legal heroes) for most people, we’ll just have to do it ourselves. We’ll have to learn what tort tossing is about. We have to learn how to file suits, write legal arguments and then argue them ourselves. And there is one thing I have learned about judges.

On the whole, judges are not especially brainy people. They are actually rather a lazy bunch. Rather than try to interpret case law in any new or insightful way that would fit the situations and our times and perils, BC judges simply prefer to cite the same rulings of other judges ad nauseam. And as we citizens push forward with learning something about the law this would in turn push the judges into a position of actually having to earn their pay by thinking about citizen’s rights instead of corporate might. The future of our province, our country and even our world may depend on this.

I intend to toss some torts myself and I’ll keep you posted.