Who Made the Decision to sell off all of Canada’s Gold? 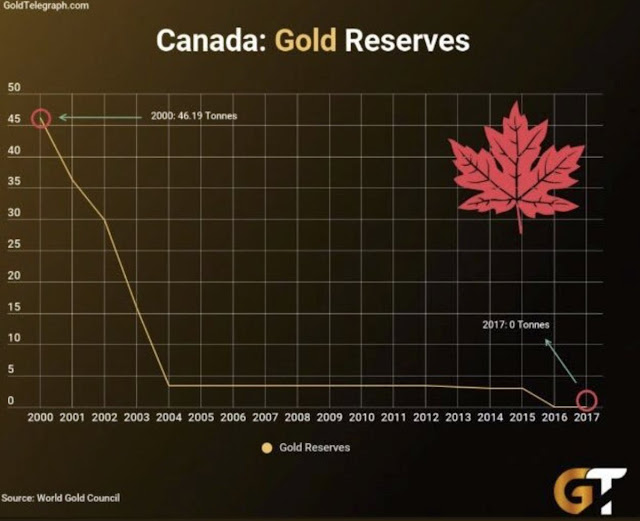 Who Made the Decision to sell off all of Canada’s Gold?

Okay, I know we are all getting worn out trying just to stay sane with all the shut-downs and trying to keep our loved ones safe, and wondering how our Prime Minister could have made such a ghastly mistake as not to recuse himself (and his family) from the WE Charity scandal.  Where were his advisers?  And all this with the economy down on both knees so to speak.  In my opinion, when this Covid-19 is over, and it will get over, there is going to be a real struggle for a new economic way of dividing up a country’s wealth.

Women have seen their governments for many decades send their men to fight in distant places and are now joining the military themselves, but they are not benefiting from the nation's wealth. The only thing straight up and down about capitalism is that it is truly great for making the rich richer and spreading poverty among the rest of us. How to change this?

I think we have to start where we live. We have to learn more about Canada, not from history books or even from what government tells us but from our own interest and need to know.  It’s work.  It’s hard work.  But we have to do it if we are not only going to survive as a nation, but prosper. I am very curious about what has happened to Canada’s treasury gold.

As I’ve discussed before, in 1965 our treasury held I,023 tonnes of gold. That’s tonnes, not ounces, like the 77 ounces that our treasury holds today which for a rich country is nothing. The first step in trying to find out who made the decision to sell off all the gold in our Canadian Treasury is to ask questions.

So who operates the Canadian treasury? From the Canadian government website one seems to first have to access the Treasury Board of Canada Secretariat site that explains the Board “provides advice and makes recommendations to the Treasury Board”.  Okay, fair enough.  Who sits on this board?  The site only lists two people, The Chair Jean Yves Duclos and Vice-Chair Joyce Murray for 2019.  The year before the positions were reversed; Murray was the Chair and Yves-Duclos was the Vice-Chair.  Who appointed these two people to sit on this board?  Are there only two people on such an important board? There is a president, and this person also chairs the Treasury Board itself with a clearly defined duty, with the website stating “The president carries out the responsibility for the management of the government”.

Well, that’s one heck of a responsibility.  But there is no name attached to this awesome responsibility.  Why don’t we know more about this person?  Who appointed him or her? What I think we need to know is when did the Canadian government start selling off the tonnes of gold in the treasury it held in the 1960s. And where did that money go? And why does it matter?  Next time.

Posted by Betty Krawczyk at 12:41 PM No comments:

What does the price of gold have to do with you?


What does the price of gold have to do with you?

In this time of Covid-19  how does the lack of gold in our Canadian treasury (except for a measly 77 ounces) matter?  But let’s take a pause.  Measure this 77 ounces of gold against Germany’s gold reserve of over 3,000  tonnes (That’s tonnes of gold, not ounces) France’s 2,430 tonnes and both China and Russia also in the top ten for gold in their reserves. The US of course tops the list by harboring over 8, 300 tonnes of gold in its reserves. So what? We are not on the gold standard anymore. Canada went off the gold standard when the US and other European countries did.  I don’t think any of us common folk know why Canada decided to sell off all the gold in our treasury.  But it matters now that they did and it will perhaps matter on into the future.  Well, let’s just think about it.

At one point when money (like the Canadian dollar) was actually backed by gold this meant that each Canadian dollar could be redeemed by the Canadian treasury.  You could give the treasury your Canadian coins or paper dollars and the treasury would give you back however many ounces of gold that coin or paper dollar said it was worth.  Most countries went off the gold standard  (1971) because there was a global run on US dollars.  That meant there was more paper US money out in circulation than there was gold to fulfill demands US dollars from foreign countries could convert into gold. In other words, the US had more debt than gold.  Is the US still in that same fix?  Yes, it is. But why should this matter to Canadians?

While officially nobody is on the gold standard anymore, when debts accumulate faster than an economy can grow countries start relying on the printing presses to avoid bank failures. With so much money being created out of nothing,  currencies start fluctuating  and become debased. Like both currencies are doing now (US and Canadian).  The US can say, well, we still have the most gold in our treasury and if the very worse happens we can buy even more gold and revert back to some sort of gold standard to back our money printing which China is currently planning for its new banking systems. And what will happen to our Canadian banking system with no gold and much debt?

Nothing good.  It will be a struggle but if we as a country use some of our time in isolation in trying to understand our own banking system we do have something none of the other gold holding nations have…or had.  We had a public bank that kept debt at bay.  We had a public bank called the Bank of Canada.  It has sense been privatized but we the peole can demand it be turned back  to the Canadian people once again as it was chartered to be not so long ago.  Next time.

CANADA HAS NO GOLD!


In the 1960s Canada had more than 1,000 tonnes of gold but began steadily selling it off. Well, now what it has is 77 ounces of gold, primarily in gold coins. This is next to nothing for a national treasury.

Canada has no gold in its treasury. Why? Why did Canada sell all it's gold which makes The Bank of Canada rank dead last in the list of 100 major central banks world wide? And is it important?

What difference does it make? Well, it seems to be making a big difference to a lot of countries. Instead selling off their gold other countries have been very busy buying it...Europe, Russia, China and

the USA. Surely, a country's gold reserves must be important, or why would all these other countries be buying whatever they can of it? And what does the Bank of Canada and the federal government have to say about the selling of all of Canada's gold?

In an email to CBC News in Feb. 2016 written by Finance Dept. spokesman David Barnabe: “The government has a long standing policy of diversifying its portfolio by selling physical commodities (such as gold) and instead investing in financial assets that are easily tradable and that have deep markets of buyers and sellers”. According to senior Finance Dept. economist Moneau , "The reason for the gold sale was was the cost involved in storing the gold and the fact gold offers a poor return”.

I agree with The Gold Telegraph that this seems like strange logic since gold has out performed the S&P 500 since 2000. The price of gold went from $35.00 an once in 1967 to over $1,300 today. (More actually, since that article was written.) Following the sale of its gold Canada's market debt has surpassed $ 1 trillion in a historic milestone.

So what does Canada's national debt have to do with the price of gold?
Next time.

Posted by Betty Krawczyk at 6:12 AM No comments: