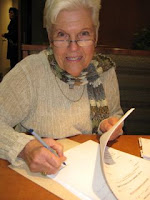 So I want to take those interested with me step by step as I negotiate the legal process of trying to sue the agencies of government and corporations that destroyed the eco integrity of Eagleridge Bluffs and caused the untimely death of Harriet Nahanee. In my next missile I will tackle the first step in filing a law suit and applying for a jury trial. I will keep you posted about these actions here.
Posted by Betty Krawczyk at 11:51 AM 1 comment:

Will Santa Buy Betty a Jury?

Yes, Please. Because that’s how one gets a jury in a civil trial in British Columbia. Never heard of such a thing? Well, neither have I. It does beat all. Lordy, Lord. Just about when I think I see my way around government by injunction in BC Courts, I’m hit with another impediment. It goes this way:

No BC Supreme Court Justice will give me a jury trial for contempt of court. I know that. I also know that I and anyone else charged with contempt of court will never receive a fair trial, even if they, as I have, wound up spending years in the prisons of BC for contempt of court. So, what to do? Well, I am thinking seriously of suing The Minister of Transportation and The West Vancouver Police for malfeasance (I might add the Attorney General of BC as well), Kietwit and Sons for physical endangerment (one of their employees tried to make me move out of the way by backing into my standing space with a humongous machine, which I have on tape), and all three of these entities for collusion to deprive me upon arrest the right to the protections of the criminal code, by refusing to arrest according to the law and waiting for the extraordinary remedy of an injunction. They deprived me and those involved in the charge at Eagleridge Bluffs our right to due legal process. Is that clear?

Okay, it’s kind of complicated. But this would be a civil court case as opposed to a criminal one, and the questions raised are in the public interest. As a civil litigant I could ask for and reasonably expect to be granted a jury in a civil suit. I could also represent myself in trial thus eliminating the need to pay a lawyer.

You might say, "Go for it Betty," but there’s an additional money problem. In BC, one has to buy a jury. Yet, even Mr. Justice J. Bouck, that most traditional leaning justice of the Clayoquot mass trials believes having to buy a jury is outrageous. In a paper about civil jury trial (Assessing non-pecuniary damages and civil jury reform) Mr. Justice Bouck writes “these fees restrict a citizen’s right to access justice. Today in BC it costs a litigant who applies for a civil jury trial $1,500 for summoning and empanelling a jury and $650 for each trial day thereafter. On top of that there's a daily trial fee of $312”

In the same paper Mr. Justice Bouck also informs us that the Nova Scotia Supreme court abolished these fees as unconstitutional in 1998 because “they put a price on accessing the courts, a price on justice.” So BC remains the only province in Canada that charges for a jury. I think it is time for a constitutional challenge on this point alone, but it may take awhile as I will have to put some money up front with my request for a jury, probably about five thousand dollars.

But I have this dream. A dream in which after hearing my evidence a jury announces that trying to discourage citizens from protecting the incredible, life giving, life sustaining, stunningly beautiful forests, streams, rivers, watersheds, wild animals, and people habitat, by placing them in a special extraordinary category of arrest to discourage any legal defense, will no longer be allowed. Then, and only then, will all of these questions of who owns British Columbia anyway, be brought into the courtroom on a level playing field. Yes, I have that dream, and it is do-able. Help me buy a jury! Small donations welcome.

NOTE from Monika Sheardown
Despite the somewhat humourous appearance of this email, Betty is very serious about this. If you were wondering what to give Betty for Christmas this year, wonder no more. Please make her dream come true, and perhaps change the future of environmental protest in BC.

HELP BUY BETTY A JURY !
Contributions in any amount are appreciated.
Send cheques to:
Betty K Fund
1945 Creelman Avenue
Vancouver, BC
V6J 1B8

Indicate whether you would like a button of Betty sitting on Santa's lap.

Books: http://www.booksofbettyk.com/
Posted by Betty Krawczyk at 11:57 AM 1 comment: