THE KIDNEY HIGHWAY AND US

The Kidney Highway and Us

I read this short story once that curled my toes. It was set in the future where the divide between the rich and the poor had become absolute and a young mother was trying to hide her child from the body parts snatchers. Which in the story was legal. The snatchers had the legal right to take body parts from the poor to sell to the rich. It was like hunting game animals. The story was absurd, but there was an underlying truth that haunted me. Because the rich have been using the bodies of the poor for whatever they needed without pay or adequate pay for eons…for prostitution, slavery, semi-slavery wages, child labour, fodder for the armies of the rich, medical experiments…so how great a stretch is it for rich people to think they have some sort of right to the body parts of the poor when they need them?

I don’t think it’s that big of a stretch. After all, when rich Canadians need nannies they are prone to summon mothers from poor countries whose own children are near starvation. The poverty stricken mothers come to Canada and the US to care for the pampered darlings of the rich while their own children go motherless and uncared for a continent away. This practice is so prevalent that some Pilipino writers are describing the Philippines as a country without mothers. And it’s a practice that will continue as long as poor mothers feel compelled to feed their children even if it means they must leave them. . So if rich people can induce poor mothers to leave their own children in order to send back enough money to feed the kids, why would these rich people have any qualms about buying or effectively stealing kidneys or other body parts from the poor? The fact is, they don’t. That early short story that freaked me has come true. The kidney highway is the very darkest underbelly of corporate capitalism. But I think it also might well contribute to its downfall. Betty Krawczyk
Posted by Betty Krawczyk at 8:35 PM No comments:

FOR THE LOVE OF THE OLYMPICS? 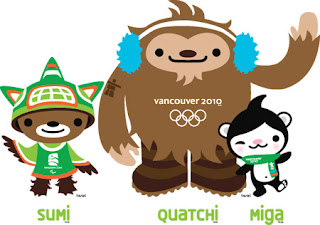 OH, FOR THE LOVE OF THE OLYMPICS!
Love? Oh, no. It’s actually money. For everybody but us Vancouverites who have to shell out for this huge province wide construction party masquerading as a civic celebration (oh, all right, everybody in the province pays). We’re supposed to do it for love. Do what exactly? Well, let’s just consider the Athlete’s Village.
Okay, so a lot of figures are boring. Even to me. So I’ll keep it simple. There’s a corporation named Millennium Development Corp. They got the nod to build the Athletes’ Village on Southeast False Creek for the Olympics which will include 1100 condos of which 250 will belong to the City after the games. For this privilege Millennium will pay us, the city, 193 million, of which 30 million will be a down payment. These condos are not for the working poor. They will go for between 500,000 and 6 million all of which they plan to pre sell. Millennium will also receive over 82 million for building the units and we will do the site fixing at another 153 million. There are two directors (Shahram and Sharokh Malekyazdi) who hold no board meetings, issue no shares and do not file the required annual financial paper with the provincial Ministry of Finance. They are partnered with Armeco Group of Companies.
Armeco currently has only one director, a lawyer who recently headed the Vancouver NPA party (Paul Barbeau). But where can these corporations, wealthy though they are, get such huge amounts of money? Well, there are two lenders… The Fortress Credit Corporation and guess who?
Well, bust my britches! It’s us! The City of Vancouver! Which means that we, us, yes us, the tax payers of Vancouver will be lending a hunk, or even most (maybe all?) of the start up money to Millennium who is supposed to pay us, for God’s sake. But somehow they have it fixed so that we pay them for borrowing money from us so they can make billions. But if we, Vancouver, have this kind of money to lend out for the already super rich people so they don’t have to use their own money why don’t we do something about the homeless? Or affordable housing? No money for that? Or money in that? Well, back to Millennium and Armeco. These two, along with Gordon Campbell simply take my breath away. Their ability to pull off such a gigantic public robbery in secret takes stealth and cunning the likes of which makes Lord Black look rather amateurish. I think Gordon Campbell, VANOC, Millennium and Fortress along with Paul Barbeau are guilty of conspiracy to defraud the public. I’ll be pouring over my law books. This has got to be against the law. Betty Krawczyk
Posted by Betty Krawczyk at 8:05 PM 1 comment: