THE WAY I SEE IT

We, The Work Less Party, compared to the other municipal parties in are like the proverbial elephant in the room. The usual suspects in the line up for the mayor’s race, with their attendant presses, along with corporate developers and real estate moguls try to pretend we’re not here. Particularly the developers. And on second thought they aren’t pretending. Flipping high end condos like hot cakes while racing after Gordon Campbell to the Olympic finish line of unparalleled goodies they certainly can’t be bothered by any dark horses in the race. When push comes to shove they know their money will act as steroids to the mayoral contestants. And of course it does. However, the elephant is stirring.

Because we offer something enormously different from the polite chit chat that Vision mayoral candidates have offered. Vision is being described as “left of centre.” Left of centre politically? How can this be when Vision is primarily funded by developers and corporations? “Left of centre of the moon” makes about as much sense. We all know that “them who pays the piper picks the tune”. And it is this very playing the tunes the piper pays for that built the environmental, economical and social mud hole we’ve all been herded and gate locked into.

Still, there are ways out of this mud hole. But not by believing the sweet talk of banal politicians who try to convince us that we can save our way of life with a little bit of system tinkering. The Work Less Party is not about saving our way of life. We are about saving our very lives, and the lives of our children and grandchildren and those of the populace at large. And the only way to do this is to start accepting, talking about and implementing the concept of “zero growth”.

There is no other way out. It is the lusting after the idea of continuous growth that is killing our planet and everything on it that breathes oxygen. But how could the fact of zero growth be accomplished without bringing commerce to an absolute stand still? Without creating even more homelessness, more ill health, more drug addictions, more crime, more everything heinous that is washing over our city as it is? Well, we have a secret. It’s a secret you already know. It’s called sharing. Does sharing our way out of a municipal, provincial and national mess sound too silly to actually say out loud? That’s because we’ve all been so brain damaged by relentless corporate propaganda that we think the main, if indeed not the only, smart, respectable human quality that can operate in our society is one of greed. But it isn’t. At some level, we all know that greed is not the main motive for living. And in the weeks and months ahead we will be expound on this ancient but ever new concept at length.

Posted by Betty Krawczyk at 11:12 PM No comments:

AM I A FANATIC? OH, YES!
I am a fanatic for love of this earth and the earth’s creatures which include a few people I have to admit, that I don’t even like. But yes, I am a fanatic For Gaia. For the mother in us all, men and women alike. For the mother consciousness in us who recognize that the recent earthquakes, storms, landslides, fires are not Gaia's revenge as one popular book contends, but Gaia's sorrow and Gaia's increasingly very public global warnings. But what do these warnings mean?

That we all must become fanatical if the earth itself is to remain a place where humans can breathe and live out human lives? I believe Gaia is telling us this. She is speaking to us. She is calling us to action. You don’t want to do actions? Well, I didn’t either. But I became consumed with the necessity of doing them anyway twenty years ago when I was living in the Clayoquot Sound. The unbelievable disintegration of the mountains and streams due to clear cutting made me a true believer.

Gaia is a tough taskmaster. She guides me into peaceful civil disobedience, out on to the various blockades, both in urban spaces and public forests, into the courts, into prison, into the political area, speaking, writing, wherever the struggle for the earth is going on, which is everywhere. Can everybody do this? No. People have jobs, kids, financial responsibilities, schooling, health problems, all of the preoccupations of necessity that modernity brings. But any social revolution has two different thrusts, one consisting of actions and one of support for the actions.

Our political, economic, legal and military leaders are guiding us to a collapse of the earth’s life support systems. We have to get out from under the political and legal structures that allow corporations and governments who manage corporations to accelerate the destruction of our very earth.

I have tried to sue Kevin Falcon and Kiewit Sons and the West Vancouver Police for malfeasance and collusion to deprive all of us protesters at Eagleridge Bluffs of the protections of the criminal code. But there is this handy bit of legal ruling in place to protect corporations and governments from serious legal challenges: citizens cannot sue on the grounds that injunctions are injurious to citizens and should not be used in eco disputes because this is called a collateral attack on the injunction that one was arrested under. It is fixed in law that one cannot complain about the very unfairness, called abuse of process, of a ruling that sends one to prison simply because there’s a legal rule that says this isn’t allowed. Isn’t that incredible? However, the judge has ruled that I can go forward, with some stipulations, with that part of my suit that is claiming assault for virtue of an action by a Kiewit employee which was encouraged, I claim, by the inflammatory public utterances of Kevin Falcon, Minister of Transportation. So we’ll see.

But the courts of BC are only one area where Gaia is beckoning. Our rivers are calling us. They are being dammed, privatized, fish killed. The wild animals are calling us from dying, denuded forests. They want to know where we are. They are asking through Gaia, for the human mothers, the mothers that live in both male and female human consciousness to come and stand with them. I believe we must use everything we have, body, mind, and soul to connect, to protect, to create, to recreate or we, and our progeny, may all die with them. We have no choice but to answer Gaia's call however best we can.

TO SQUAT? OR NOT TO SQUAT? 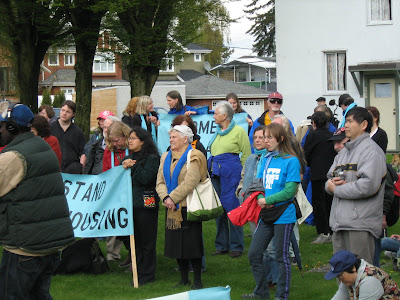 TO SQUAT? OR NOT TO SQUAT? THAT IS THE QUESTION.

Squat. The very word has a harsh ugly sound. Almost like spit. Or that other S word. From Wikipedia the word squatting in a political sense means “the act of occupying an abandoned or unoccupied space or building that the squatter does not own, rent or otherwise have permission to use.” Okay, that’s straightforward enough

There was a rally at Little Mountain low rental complex today. Five hundred people are losing their homes there. Private developers are moving in, moving on up, sucking in public land, public assets, fattening further on the flesh and souls and futures of poor people. Earlier I was on one of the Stands for Housing that took place all over the city today demanding that housing be recognized as a human right. Why? Because it’s inhuman to leave whole categories of people homeless in a province awash in wealth.

People sicken and die from homelessness. Working families sicken and fall apart when there’s not enough money for food, clothes, transportation and school supplies after sky high rents are paid. Everybody sickens when they live in a city where a provincial government, crazed and stupid from an absolute privatization ideology, gives a housing allowance of 375 dollars a month per adult on public assistance. Where is anybody in this city going to find a place to stay for 375 a month except bunking in with a stranger in one of the flea bag hotels which in turn are rapidly being empted out for development? Where, I want to know is the mayor and council on this? Why aren’t they jumping up and down at such miserable treatment of citizens? Why aren’t they screaming in the streets?

Where are their guts?

Apparently they don’t have any. Or else they have shriveled by the dazzle of developer’s money, by the shock and awe of corporate might. In the face of this crisis let’s at least look at the possibility of drafting some sort of squatters rights. Don’t faint on me now. Stay with me. To prevent revolutions some countries, even western ones, have drafted squatter’s rights, squatter’s laws. In the if a house is empty a year or more then squatters have a legal right to move in. There are similar rulings, laws and by laws in other countries.

Growing poverty is dogging us like a plague. Over priced housing and homelessness are festering sores. While, of course, and at the same time, development runs amuck. But the solution is relatively simple. Run the developers and their politicians out of City Hall, out of the legislature, out of parliament. It’s almost as though most of the rest of us are being held in a kind of Stockholm Syndrome where we have been persuaded by the highjackers and kidnappers that their interests are also ours. In our finer moments we know this is not true. Let’s collectively find our own guts, our spleens, our good hearts, and strong minds. And we can do this.

Posted by Betty Krawczyk at 5:18 PM No comments: