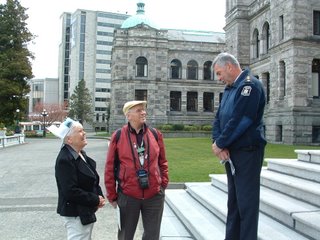 The fact that government is supposed to deal with the concerns of citizens is the very reason Gordon Campbell has disappeared government. He obviously doesn't believe in citizens and citizenship. He obviously believes in oligarchy, one that care only for corporate rights and needs. But we citizens are still paying for this disappeared government. So what do corporations do when they pay for something and don't get it? They sue. So let's sue the bastards. Betty Krawczyk
Posted by Betty Krawczyk at 11:21 AM No comments: 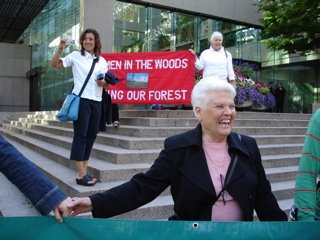 Betty’s Lawyer Withdraws from Her Case
In Supreme Court yesterday before Madam Justice Brown, my lawyer, Cameron Ward, withdrew from my case on my request and his own frustration at the refusal of the court to allow arguments on abuse of process. What is abuse of process? The way in which the law in BC is applied in environment disputes to use arrests by injunctions instead simply police arrest. By the injunction process citizens can be threatened with severe economic losses if they protest environment destruction. But Madam Justice Brown struck down the request for arguments on the issue. Much to Kiewit and Sons satisfaction I am sure. And that of Kevin Falcon, as Mr. Falcon greatly admires the Chinese way of treating protesters. However, whatever his private thoughts, Mr. Falcon did fall short of publicly suggesting that we Eagleridge Protesters simply be taken out and shot.

I greatly admire Cameron Ward’s work and love him like a son. But I know when it is time to tell the son please, dear, you’ve done all you can do and I’ll tend to the rest of this miserable trial myself. But the trial will go on.
As the attention of the media on the Eagleridge Bluffs blockade is the criteria used by Crown Counsel Michael Brundrett to argue for my conviction of Criminal Contempt, I will be using Freedom of the Press as one of my main points of arguments against the charge. I will argue that citizens have a right to access the media and no. 2, that media attention actually helps keep protesters physically safe. I would like to get this over with sooner, but my defense won’t commence until Jan. 29. 2007. But Madam Justice Brown has given me a week to present my case. During this time I will be collecting all the data I can on Freedom of the Press cases and if anybody out there has some good ones please advise and the sooner the better. My love, Betty K
Posted by Betty Krawczyk at 5:19 PM No comments: