Betty announces her Candidacy for Mayor of Vancouver 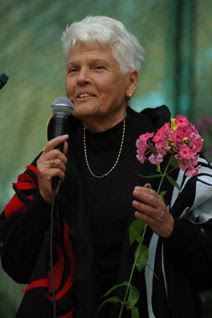 After 7 months of incarceration at Alouette Correctional Centre for Women, Betty Krawczyk returned to Vancouver and hit the ground running. After a number of television, radio and newspaper interviews, she addressed a packed audience at her Welcome Back rally last night at the Supreme Court in downtown Vancouver. Speakers included key figures such as author and journalist Rex Weyler, Deputy Leader Green Party of Canada Adriane Carr, Lawyers Cameron Ward, Pivot Legal Society's David Eby, Wilderness Committee's Joe Foy, CFRO's Charles Boylan, indigenous activist Kat Norris and many others. Each stated their views about a world in which a great-grandmother that stands up for our environment and democracy is awarded with jail-time by our courts and our government.

Liberal politician David Orchard sent his message to Mrs Krawczyk via a letter stating "Inside the prison you continued your work of fighting for, and speaking out for, those whose voices are seldom heard. Your stand on behalf of our trampled and beleaguered environment is appreciated by multitudes across our country and beyond."

Vancouver singers Edith Wallace, Spirathon, "Stompin' Tom" Mitch Anderson and the Carnival band entertained the crowd. But Betty Krawczyk stole the show when she took the stage to announce her candidacy for Vancouver's next mayoral election. Her announcement, greeted by cheers and applause, was no surprise to many who know her stand on the importance of more "ordinary citizens" to be politically active. For more information see the Facebook group "Betty K for Mayor of Vancouver" at
http://www.facebook.com/group.php?gid=7169511067

Upcoming events at which Mrs Krawczyk will speak include:

1.Friday September 28th 5:30 - 8pm
Critical Mass Bike Ride
Behind the Vancouver Art Gallery with the Olympic Clock at Howe and Georgia.
A pedicab will take Betty Krawczyk on this well renowned ride.

2.Friday September 28th 8:00 pm
Betty Welcome Back Party
The Anza Club, #3 West 8th
Fundraiser for her campaign.
This will be a fun event with bands, performances, great DJ's and dancing.

4.Sunday September 30th, 12-4pm
The Salmon Celebration
Vanier Park beside Maritime Museum
Honour the spirit of the salmon that used to live in the streams that flowed into False Creek. 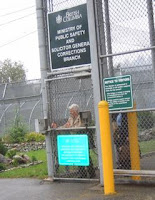 Betty K was released from Alouette Correctional Centre yesterday. She says she is "happy happy happy" and greeted reporters with her usual wit, wisdom and charm. She re-iterated that the fight at Eagleridge was not over, that it has become a symbol of our Courts serving the corporate agenda. She will go forward with her appeal, and sue Kiewitt & Sons for damages to the environment. She underlined the importance of understanding that social problems and environmental problems are closely intertwined, and that one cannot be solved without addressing the other.

Plans for her immediate future included a hearty breakfast of bacon & eggs, eaten at a nearby diner minutes following her release, later, homemade shrimp with her daughters. More long term political plans will be announced later today at Welcome Back.

Betty's Release from ACCW today 8:15 AM

Officials from Alouette Correctional Centre for Women have confirmed that Mrs Krawczyk will be released along with 2 other inmates Tuesday September 25th at 8:15AM.

Betty Krawczyk has been incarcerated at ACCW since March 5th 2007 for breaking a court injunction granted to Kiewiett & Son's. Betty along with other protesters took part in a blockade in an attempt to stop the destruction of Eagleridge Bluffs in West Vancouver. This fragile eco-system was obliterated for the expansion of the Sea to Sky Highway as required for real estate developments, with the official pretext of building infrastructure for the 2010 Olympics.

She will be welcomed back on Wednesday, September 26th and Friday September 28th at the following events:

2. Friday September 28th 8pm at the Anza Club
Please join us Friday September 28 to welcome Betty Krawzcyk back.
This will be a fun event with lots of dancing, bands, performances, great DJ's and much more dancing.
The event is a fund raiser for her legal expenses.

Cost:
$5 if you arrive with Critical Mass
$10 otherwise
NOBODY WILL BE TURNED AWAY DUE TO LACK OF FUNDS !

Writing news releases, speeches and books, preparing her appeal, working at the prison library and acting as "Jail Mom" isn't enough to exhaust Betty Krawczyk's seemingly endless energy. Betty has also been sharpening her legal skills at ACCW. She's been helping Laurie Dolan fill out the perplexing forms and legal paperwork to file an appeal, after her house was destroyed and her daughter committed to a Mental Health Institute by her ex-husband as part of an insidious attempt to confiscate votes on the Reserve. Betty has applied to appear in court with Laurie on September 19th, six days before her planned release. Betty provides more details.

Tsawwassen Treaty Collides with Inmate at Alouette from Semihamoo
Dictated by Betty Krawczyk from Alouette Correctional Centre for Women in Maple Ridge, BC.

So what is this about?

However the two bands are now in the process of working out their difficulties, and that deal with the government is set to close soon. However, Laurie Dolan claims that this is fraudulent because her vote and the vote of her daughter have been stole. They had been chased off the reserve by Laurie’s ex-husband, who is also Jennifer’s father - And this expulsion from the Reserve was in collusion with the Semihamoo Chief, Willard Cook.

These two men expelled Laurie and Jennifer from the reserve by destroying their houses on the reserve, so they would no longer have addresses there, and without an address on the reserve, not entitled to vote. Further, as Jennifer Dolan is accusing her father of rape as well as destroying her house, the father had her committed to a Mental Health Institute, under the auspices of the Semihamoo band. And when Laurie Dolan objected to this treatment of their daughter, he had the Reserve police arrest Laurie for uttering threats.

So at this moment, Jennifer Dolan is confined to a Mental Health Facility, her mother Laurie Dolan is in prison, and the Semihamoo “Yes” vote was safely delivered in favour of the Tsawwassen Treaty.

Legal aid refuses to give Laurie a lawyer to appeal the Uttering Threats charge. I have applied to appear in court with Laurie in Court on September 19th as a McKenzie friend of the court, as she has no lawyer, little formal education, and has difficulty with legal language.

Justice in BC is increasingly for sale, and increasingly politicized. When a huge Aboriginal treaty, like the Tsawwassen Treaty could go forward on the back of outright Reserve voter fraud and criminality is pathetic.

The jailbird is getting out Sept 26th.
Let's welcome her back with a big bang:
Featuring Chief Capilano, Rex Weyler, Joe Foy, Tzeporah Berman or Valerie Langer, David Eby, Sue Rowan Edith Wallace, and much much more!
Wednesday, September 26, 2007, 5 - 8pm
**Note the change in Venue:
Front steps of Criminal Court, corner of Hornby & Smithe Streets in Vancouver
Posted by Betty Krawczyk at 10:36 AM 1 comment: 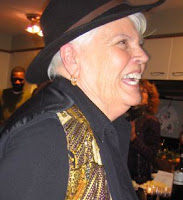 It's hard to believe that it's been 7 months. Time flies, for us on the outside, anyways. Time for a welcome back bash to celebrate Betty's release from Alouette Correctional Centre for Women.

Date: Wednesday, September 26th
Time: 5 to 7pm
Place: The Olympic or "Free Betty" Clock behind the Vancouver Art Gallery,
Geogia and Howe St., Vancouver
What: A rockin' party including live music, theater performance , celebrity speakers, dancing and general revelry
Why: To welcome Betty after serving time for her efforts to protect Eagleridge Bluffs by standing up to corrupt BC government and corporate policies
Who: EVERYONE (that means you).

1. ORATO.COM
Betty’s piece is the top story on the homepage of Orato today, an online journalism website featuring stories from around the world.
Check it out at:
http://www.orato.com/node/3359

2. SPIRATHON
Recently, on July 21st, Spirathon, who will perform at "Betty's Welcome Back Bash" performed 'Green Olympics' at Savary Stock II, a benefit concert on Savary Island B.C. On that rainy day, they were thinking of Betty!
Here is a link to their myspace page:
http://www.myspace.com/spirathon
The video is on the right hand side.
It's called Green Olympics Savary Stock II (2007).

3. SUPPORT FOR HIGHWAY OF TEARS
This is the event we are having at the Yale hotel in Vancouver! It is a fundraiser for the Highway of Tears. We hope to see you all there!
http://www.theyale.ca/events2.cfm
Thank you for your much appreciated efforts in this very sensitive issue.
All my Relations,
Gladys Radek
Advocate for the Highway of Tears

4. Fight against corporate use of injuctions to disperse enviro-protectors
RALLY: Sacred Headwaters Rally at Supreme Court
Date and Time: Friday, August 31 from 10am till 1pm
Place: Supreme Court Building, at the southwest entrance at the intersection of Hornby and Nelson Streets, Vancouver

Does it really make sense to jeopardize multiple watersheds with the toxic run-off resulting from coal bed methane extraction methods? Coal bed methane extraction has never been done in a wild salmon environment, and the potential for envrionmental damage is tremendous.
Royal Dutch Shell appears in Vancouver court this Friday to try to get an injunction that will allow the company to have the RCMP arrest blockading Tahltan Elders
preventing Shell from proceeding with its coalbed methane mine. If Shell receives this injunction, arrests could take place as soon as next week.


Here is a test to see if your mission on Earth is complete:
If you're alive, it isn't. Richard Bach
Posted by Betty Krawczyk at 12:03 PM No comments: