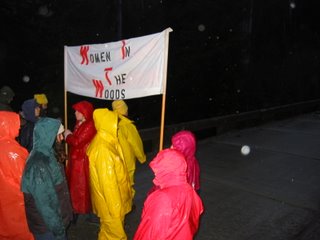 OOPS! In my previous posting I wrote that Hayes Forest Services who is suing me for this blockade in the Walbran Valley was contracting for MacMillian Bloedel at the time which was not the case. Hayes was contracting for Weyerhaeuser when they brought down the injunction which resulted in my arrest. But the two giant US based corporations are so similiar in their ruthless corporate profiles as invaders of Canadian old growth forests and they both have given me such a hard time, in order to avoid confusion I'm looking for a generic name for them. Any body got any ideas?
Betty K
Posted by Betty Krawczyk at 12:09 AM 3 comments: 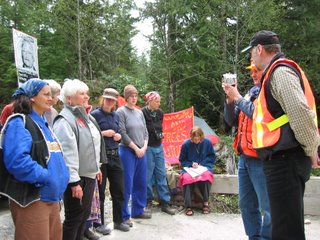 BETTY’S CHRISTMAS PRESENT
FROM THE US LOGGING INDUSTRY

My stars, will wonders never cease? At Christmas time, too. Just received a notice that Hays Logging is suing me. Yes, indeedy. For stopping for a few weeks their incessant feeding of Canadian public forests (the Walbran) to the American giant MacMillan-Bloedel Logging several years ago. The very same accusations that jailed me for ten months under the Campbell government. But are they satisfied? Oh, no. They want more granny blood. They want my little cabin in the woods. As I have no car, no money. no investments and live in a rented apartment in a cheap part of town, they can only go after my little cabin with its leaky roof and compromised front steps. Or is is that really what a giant US corporation like MacMillan Bloedel and its sub contractor, Hays Logging, is after?
Maybe not. . Instilling fear in me and other citizens is more likely. Fear works. Not always. But enough to make mullti national corporations who loot and plunder the world over even more arrogantly bold. And the loot and plunder becomes even sweeter still with provincial leaders like Campbell on side. Campbell is dazzled by the audacity of Americans. He loves their style of cut and run. And I have a deep, dark suspicion that the CEO’s of Kiewit and Sons, another giant US firm looting and plundering on Canadian soil (Eagleridge Bluffs) and the CEO’s of MacMillian-Bloedel with Hays Logging tagging along to give some hypocritical pseudo Canadian input, have tea together form time to time with Gordon Campbell. After all, he invited these Americans in to help formulate government policy on public logging.
The kind of law suits that Hays logging (surrogate for MacMillan Bloedel) will be pursuing against me is called a SLAP suit. These suits are used in BC with the help of the courts to keep citizens out of our own woods. SLAP stands for Strategic Lawsuits Against Public Participation. Isn’t that an apt title? Isn’t that beautiful? Again, Gordon Campbell thinks so. He canceled the NDP anti- slap suit legislation that was just beginning to take hold in BC as soon as he got into office. And Mr. Wally Oppal promptly informed the press that SLAP suits, piggy backed with court injunctions and charges of contempt of court would remain the preferred way to curb environmental protest. But can Canadians, on sovereign Canadian soil, slap back at these foreigner invaders and destroyers who are protected by slack minded politicians and vacant eyed underlings who steal away living Canadian treasures? Of course we can. More later. Betty Krawczyk
604-255-442
Betty_krawczyk@hotmail.com
Posted by Betty Krawczyk at 5:32 PM 2 comments: