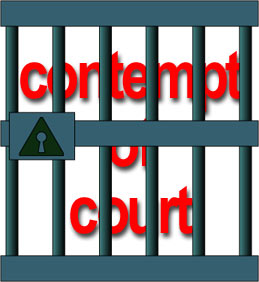 Jan. 24, 2007
This morning, shortly after ten, Madam Justice Brown sentenced Squamish elder Harriet Nahanee to fourteen days in jail for asserting her rights under the Constitution as an Indian and refusing to apologize to anybody, including the court, for blockading at Eagleridge Bluffs. Betty Krawczyk, who had been acting in the courtroom as a McKenzie Friend of the court on Harriet’s behalf, knowing full well the horrors of Surry Pre-Trial where Harriet will most likely be kept, objected strenuously at the sentencing. Betty was forcibly ejected from the court room and refused re-entry.
It seems that these great grandmothers are the only two who have refused to apologize for trying to protect Eagleridge and are the two who will pay the price in jail time. Betty can’t speak for Harriet right now because Harriet is in jail, but Betty wants everybody to know she will apologize to Kiewit and Sons and Mr. Falcon, Minister of Transportation when they apologize to the people of this province for destroying a valuable eco system to serve their own dark, troubled corporate loving egos. Her trail begins on Monday, Jan. 29 at the Supreme Court in Vancouver. It will last a week. She will represent herself. Come support these two great grandmothers who are trying to help save life and breath for the next generations. Betty Krawczyk
Posted by Betty Krawczyk at 10:44 AM 5 comments:

On the radio yesterday (CKNW) Wally Opal (BC Attorney General) told all and sundry that anybody facing jail could get a jury trial. When I called in and asked Wally why no jury for me (I am currently in trial beginning Jan. 29 charged with criminal contempt of court) he said because I was arrested under a civil contempt charge which doesn’t warrant a jury trial.
Not isn’t that cute. Of course. They always arrest me (for environmental activism) under a civil contempt charge but the civil charge doesn’t stay civil long. It seems to automatically turn into a criminal charge. Then the entire trial becomes a farce as they use civil rules to convict me of criminal contempt of court. And then I am hauled off to prison (two and a half years and counting). And all without benefit of a jury trial.
Wally Opal knows this process isn’t fair, and that he is lying when he says my charges are civil. I am charged with criminal contempt, on trial in the criminal court. I asked for a jury trial. The judge refused. So I am being charged as a criminal once again, but with no jury. Wally Opal doesn’t care that he lies. He knows, the Crown knows, Gordon Campbell knows, and the court knows, that if I had a jury I would probably be acquitted. This is why they won’t allow me a jury trial even as I face criminal charges and imprisonment. Betty Krawczyk
Posted by Betty Krawczyk at 9:29 PM No comments: 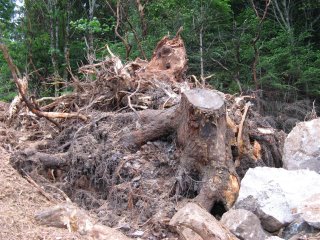 Betty, Winds of Change, and Eagleridge Bluffs
What does the destruction of Eagleridge Bluffs have to do with BC wind storms? Everything. Nature is connected. All over the world. The constant felling of trees makes the wind blow. Which causes more trees to simply blow down. When citizens like Betty protest vigorously they wind up in court. Before judges who are trained only to look at the law and who do not consider nature. Which has the effect of allowing more trees to be cut which causes more wind to blow which in turn blows down more trees.
Betty believes this insane syndrome must be stopped forthwith, even if it requires citizens to take up peaceful civil disobedience when all else fails. Come support Betty in her week of trial. She will be representing herself in her efforts to bring nature into the courtroom. Her trial begins Jan. 29. The Supreme Court Building at 800 Smithe. Ask at desk for room number. 10:00 am. Betty Krawczyk
Posted by Betty Krawczyk at 12:09 PM No comments: 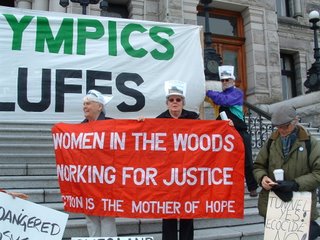 
IN THE SUPREME COURT OF BRITISH COLUMBIA

BETWEEN:
HER MAJESTY THE QUEEN


NOTICE OF APPLICATION FOR CONSTITUTIONAL REMEDY


TAKE NOTICE that an application will be brought on behalf of the Accused pursuant to the Canadian Charter of Rights and Freedom to the British Columbia Supreme Court at the Courthouse located at 800 Smithe St., Vancouver, British Columbia, on the 29th day of January, 2007 at the hour of 10:00 a.m. in the forenoon or as soon thereafter as the Motions my be heard for an Order that:

The Applicant claims protection of Sc.2a of the Canadian Charter of Rights and Freedom in the charge of Alleged Criminal Contempt of Court against her in an environmental dispute and will argue her right to exercise her Freedom of Conscience under Sc.2a and is seeking relief in these areas:


2 The Applicant claims her rights to the protection of 2a, 2b,2c and 2d under the Charter have been infringed which includes not only the provisions that guarantees Freedom of Conscience, Freedom of Speech and Freedom of the Press, but also Freedom of Access to the Press through Freedom of Association and Freedom of Peaceful Assembly. The Applicant claims that the present criteria used by the courts in British Columbia in environmental disputes that result in alleged civil contempt of court charges being raised to criminal contempt of court due to the amount of attention, or press, surrounding the protest denies the Applicant’s Charter rights of 2a,b,c, and d.

3 The Applicant will argue that that her rights under Sc 7 of the Charter has
also been infringed through this criteria for elevation of her alleged charges
and asks that the criteria of how much attention, or press, attends an
environmental protest be struck down pursuant to Sc. 24(1) The Claimant contends that only actual charges of alleged criminality by environmental protesters, that is, the use of violence against other persons or property, or threats of violence, should be the criteria for the elevation of alleged civil contempt to alleged criminal contempt.

The Applicant was, and is, being held in arrest by a trial judge under BC Rule 56 without an underlying specific charge by the complainant corporation, and the Applicant’s case has subsequently been turned over to the Crown, by invitation from the judge. The Applicant claims that this procedure gives the appearance of judicial bias and the Applicant seeks relief under Sc. 11(d) of the Charter to the right to a trial untainted by the appearance of judicial bias and to Sec. 15 of the right to equality before the law. The Applicant asks that the use of BC Rule 56 which gives the trial judge the right of arrest without a specific underlying charge by a company, or corporation or government complaint and which then enables the same judge to invite the Crown to take charge of the proceedings be declared unconstitutional and struck down pursuant to S24(1)