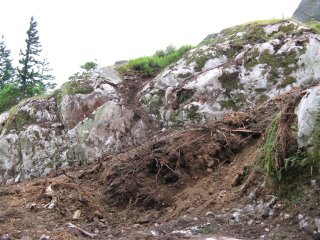 BC JUDGES A PRIESTLY CAST?
Well, BC judges certainly bear a striking resemblance to the Catholic Church in their resistance to change as far as the evolution of their church/law is concerned. And parishioners or citizens who question the dogma of either are uniformly severely punished and cast out. Or in case of opposition to a bad law, jailed.
In Catholicism, what was written down by God and his prophets thousands of years ago can’t be abridged or reinterpreted. Substitute the Supreme Court of Canada for God with Chief Justice of Canada Madam Justice Beverly McLaughlin as head prophet and Madam Justice Brown a dedicated disciple then you have the absolute triad necessary to throw dissenters into the fiery furnace.
Within the church one can become a Protestant if one still desires a Christian church of some kind, and the very word Protestant means those who protest. But there are no avenues to change within our legal system. One can’t say well, I want more evolution in my law so I’ll just join another legal system. The one we’ve got is the only one we’ve got. So we have to change this one.
But as the Inquisition tested infidels by binding heir hands and feet and throwing them into a river with the supposition that if they ere not infidels God would save them, our courts put protesters into the double bind of arresting under court injunction and then forbidding an argument against the injunction.
How sweet it is! At least for a huge rapacious American corporation like Kiewit and Sons who got the Greenest Games Ever contract to blast Eagleridge Bluffs to bits, tell the West Van police when to arrest by injunction and then make BC taxpayers pay for their court costs. Oh yes, how sweet it is! And how tenaciously the church and the courts cling to their dogmas. No breaths of fresh air allowed in here! Only precedent. Only what the gods portray as truth.
So you may have guessed by now that Madam Justice Brown ruled against my application to defend myself against Contempt of Court by using the inappropriateness of the courts, the police, and the Attorney General using injunctions instead of the Criminal Code for arrest of protesters. But we certainly haven’t thrown in the towel. Or thrown in anything. Except more energy into the fray.
The Crown has rested their case. I’ll be back in court on Oct. 5 to find out when court will convene for my defense. And truly, how can I loose? With such wonderful friends and supporters and a very savvy lawyer. It’s all good. My love, Betty Krawczyk And I’ll keep you all posted.
Posted by Betty Krawczyk at 6:39 PM