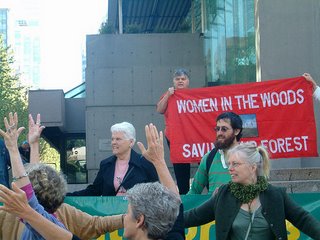 What kind of a criminal mind trumps the criminal minds of murderous Hell’s Angles and that of a grisly mass serial killer? Why, the criminal mind of great- grandmother Betty Krawczyk who stood in the way of the blasting of Eagleridge Bluffs, of course. At least that’s what the courts and the Crown seems to think. In what way, you may ask?
Well, the Hell’s Angles and Robert Pickton will actually get fair trials. They will have the protection of the Criminal Code of Canada which insists they have fair trials. But Betty Krawczyk has never had a fair trial because the Attorney General and the courts keeps putting her into a special category called contempt of court and denied the protections of the Criminal Code. In the contempt of court category there is no right to a jury trial, no right to argue the court ruling she was arrested under, and no right to bring character witnesses. The government, courts, and Attorney General of BC are more upset over a 78 years old grandmother challenging the right of corporations to squander and plunder the land than they are about the crimes of drug and prostitution lords, or about a man who killed dozens of women in the most gruesome ways, or the man who debauched dozens of young girls in his trusted role as teacher.
Oh, yes, the government and the courts seem to say, society can absorb these crimes. They are, after all, just crimes against people, mostly female people. But what Betty Krawczyk did was unspeakable. She challenged the might of corporations, along with dozens of others. So she must be stripped of the protections of the law afforded all other kinds of crimes, even the most heinous, and severely punished outside the protections of the criminal code. Betty will hear her sentencing on Thursday morning at 9:00 at the Criminal Court building. Rally at 8:30.
Posted by Betty Krawczyk at 8:25 PM