WOMEN IN THE WOODS AND RICK JEFFERY 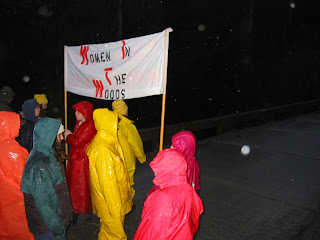 WOMEN IN THE WOODS AND RICK JEFFERY
WOMEN IN THE WOODS originated around my kitchen table in Victoria back in 1999. I first met Rick Jeffery in 2003 during our blockade in the Walbran Valley on Vancouver Island when Jeffery was spokesperson for Hayes Logging. There was a series of meetings on the blockade line. I talk about these meetings in my recent book: “OPEN LIVING CONFIDENTIAL: from inside the joint “which resulted in a ten month prison stay (try the library or Goggle schiverrhodespublishing.com) for me. Jeffery got promoted.
Jeffery is now CEO for Coast Forest Products Association. And he thinks the HST will just be wonderful for corporate logging. Remember THE BAND and their recording of TAKE THE LOAD OFF FANNY AND PUT THE LOAD RIGHT ON ME? Well, the corporate world Jeffery represents is “Fanny” and we are the “me”. HST means the corporate logging world pays less tax now and we pay more. And the Corporate logging companies can continue to make stupid, uncaring mistakes in their methods of logging that have devastated the integrity of the public forests in this province with impunity. Like the banks, corporate logging companies are considered too big to fail and will continue to get hand outs from government, especially the Gordon Campbell government, no matter how corrupt. This province has been riddled with corruption in the forests since Honest Bob Summers, as he was called, was jailed for accepting bribes in return for a huge Tree Farm License. Sommers was the first forestry minister of BC. He got five years. But the corporate logging company who bribed Sommers was not indicted and even got to keep the Tree Farm License they secured through bribe money.
And the corruption continues in the corporate logging world. We see this in the way the First Nations are swindled out of their land rights and how thoroughly the old growth trees have been wiped out. We see corruption in the dubious swaps that allow forestry giants to take what they claim is their private land out of Tree Farm Licenses. And they neglect to mention that the corporations were granted access to most of the old growth on Crown lands in return for the initial inclusion. Now that corporate logging has sucked up all of the valuable timber the corporate owners want to swap back again. And the Camp bell government agrees. The forests are gone but the ruined and clear cut land can now be sold for development. To Campbell’s rich friends. And corporate logging was granted these vast tree farm licenses in the first place on the condition they must have mills attached. That stipulation no longer applies. Workers jobs are now hitching a ride with the raw logs that are being increasingly shipped out. I believe that the corporate logging in BC is so corrupt that there is no hope for it either morally or financially. The logging corporations are imploding by their own greed and lack of care for the workers and lack of respect for First Nations. We need to nationalize our forests along with our water and banking systems. If we don’t our country will eventually be as denuded as Tahiti and as broke as Greece.
Posted by Betty Krawczyk at 11:23 AM