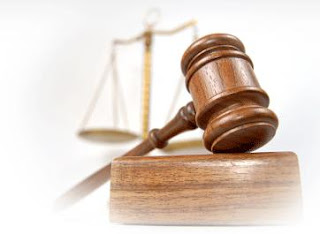 The way the Court system works is a mystery to most people including me. It's the language, for one thing. It's in a special code. The biggest problem I have encountered is simply trying to break the code. Even after all these years of being hammered by legal language I am still puzzled by most of it but what I do understand, or think I do, I will pass along to you.

First, I asked the Court in my written factum, which must be submitted to the Court before the day of the hearing, that I be given a new trial with a jury. The Crown (Mike Brundrett who represents the Attorney General of BC) asked in his written response to my factum, by using case law (what other judges have decided in other cases) that the Court should consider that I be declared a dangerous habitual offender and given life. This was evidenced by Mr. Brundrett in his written response by using two cases of violent pedophiles who attacked their own children repeatedly. By this Mr. Brundrett accomplished two things:
(a) he associated my name and person with violent, debased men in the hopes of anchoring this message in the judges' heads
(b) he brought to the court's attention that I had repeatedly broken other judges' orders- which is what an injunctions is and which no judge likes to hear about.

I based my argument on two main things:
(a) that a summary process (which mine was) is defined in the Criminal Code as sentencing that does not exceed six months. I was given ten.
(b) when Madam Justice Brown ruled on my application that she would not allow for a jury trial, she was not considering sentencing me to over five years (which is the time frame for being eligible to apply for a jury trial) and yet the Crown came back on appeal and recommended to the Court, through case law, that I should be sentenced to life in prison. Only in his written words to the judges did Mike Brundrett recommend this and, sneakily, only in his written responses to the Court did he propose that I should be given life. And to make sure the appeal judges didn't miss his message, he emphasized "should be given life".

The appeal judges have reserved their decision. Of course I am hoping for a new trial with a jury, but failing that, it would be heartfelt hopeful if they gave me enough room in their decisions to take it to the Supreme Court of Canada. If they did, I would walk to Ottawa. I think...

In any case, I will be sure to let you know.

In the mean time, you can listen to my interview with the Current on the CBC regarding the appeal arguments: