China should “Make Extended Preparations for War?”
How to make sense of this announcement by the Chinese President Hu Jintao? War with whom? Surely China isn’t going to invade Iran. China is the number one oil and gas importer from Iran. The Chinese buy their gas and oil, they don’t go around bombing other countries for it as the US does, as the US is threatening (and preparing) to do at this moment. The war drums have been beating down south for some months now. The message from the US is that they want to invade Iran (Patrick Pexton, Washington Post 1/6/12). However, perhaps the drums may pause to reflect on news of China’s recent announcements. Chinese Major General Zhang Zhaozhong says that “China will not hesitate to protect Iran even with a Third World War in order to safeguard their domestic policy needs”, and Chinese President Hu Jintao announced that the Chinese navy should “make extended preparations for warfare”.(Commodity Online, 1/7/12).

Okay, this seems to be about the Chinese warning the US that if they invade Iran there will be hell to pay. Like a third world war. I get it. Will Obama get it? I think he will. And so will the international banks, lending institutions, and all the makers of drones and exotic military mechanisms eating up the US budget. Why do I believe the One Percent will also get it? Wouldn’t the US OnePercent just love to invade Iran because of the billions, (maybe even trillions) to be made from waging such a war itself, plus all that oil? Oh, my God, all that oil!

But while the deep socketed eyes of the OnePercent may roll and glisten at the very idea of Iranian oil, I don’t think a US Iranian invasion will happen. Why not? Is it because I think Wall Street and the Military Industrial Complex might be stricken with a conscience? One that might suggest to them there is something immoral with ordering US personal sitting safely behind their desks in the US to direct the deadly unmanned drones to take out foreign soldiers and civilians alike if need be? No, nothing that improbable. 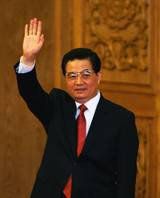 The real reason I don’t think there will be a US invasion of Iran is because China has “dibbies” (a word we used as children to denote prior possession) on Iran’s oil. And China has now let it be known they will protect their oil interests there. The American OnePercent can chew their fingers, snort a little coke, cry and wet their pants at the thought of the billions being so tantalizingly close and yet so far away and speaking Chinese. But they know they have to back off Iran. If they don’t, China might slap a claim on what is owed them by the US Treasury, start dumping US dollars and refuse to buy any more US bonds which would bring the US to their knees without firing a shot. The Chinese navy, the one that President Hu Jintao is talking up, is only for show. It is a symbol for the money war that is entirely in China’s power to wage and win. It’s an ironic twist. The only entity that can actually hurt the OnePercent is China. (photo: Chinese President Hu Jintao)
Posted by Betty Krawczyk at 1:42 PM