ROBERT BATEMAN, HOW COULD YOU?
As if women didn’t bear enough blame for just about everything that goes wrong in this world, now Robert Bateman, that esteemed nature artist, has wagged his finger at mothers in severe reproach.  It is primarily mothers who are to blame for their children’s ignorance of nature, he says.  A CBC News report posted 5/24/ 2013 Robert Bateman as quoted: “The mothers think, ‘Well if the kid is busy with a screen, he’s safe, he’s not going to fall out of a tree, he’s not going to be abducted.  Yes, but have you ever head of internet predators?  Have you ever heard of internet pornography? it’s not dangerous to go outside’…”
First, Mr. Bateman, not all kids are boys.  I personally get tired of men who seem to think only of little boys when they speak of children.  And yes, Mr. Bateman, mothers have heard about internet predators. And yes, mothers have also heard about internet pornography.  And mothers have heard about bullying at school, cut backs in children’s services, the rise in mental illness of children, the overuse of Ritalin, the startling early puberty of girls, the rise in boys with undescended testicles at birth, the children suffering right here in this province from malnourishment, the children dying in other countries not only from hunger, but from disease and war, the staggering rise in birth defects in countries like Iraq caused by  the depleted uranium left behind from US weapons…we have heard it all, Mr. Bateman.  And we don’t need any lectures from you who have quietly practiced your art in public forests that have been decimated by private logging companies that don’t give a dam about nature, and have been and still are, in the process of poisoning the public land and waters they leave behind for the rest of us.
Just for starters, Mr. Bateman, consider the tons of Round Up and Vision (courtesy of Monsanto) that have been sprayed or injected into BC public forests after clear cutting (to keep unwanted species from crowding out new tree seedlings). Round Up and Vision contain glyphosate which, according to French-trained Pediatrician, Josette Wier as she brought  this charge recently to court supported by West Coast Environmental Law, also contains an ingredient known as POEA that is toxic to amphibians and perhaps to humans and human embryos.  Perhaps?
Glyphosate is now being linked to all manners of human ills, including being a hormone disrupter which can cause birth defects, Attention deficient disorder, breast milk contamination, and the drop in male sperm count.   And our beautiful outdoors?
The logging companies and governments of BC have sprayed and injected tons of Round Up and Vision (Monsanto’s darlings) all over Vancouver Island.  And are still doing it.  Glyphosate stays in the ground, it doesn’t dissipate.  BC rains ( and we are a rain forest) wash newly sprayed river and creek banks and the glyphosate runs into the creeks and rivers and into main water supplies.  Robert Bateman, it is not mothers causing all this environmental mayhem and putting children at risk.
Mothers do the very best they can under the burden of trying to keep kids safe while working both in and out of the home and at the same time try to protect their kids from  traffic crazies, sex crazies and power crazies who are killing the earth itself, and of whom the overwhelming majority  are male. What about this suggestion, Mr. Bateman?  What about fathers talking their kids into the woods (avoid newly sprayed or replanted areas, don’t drink the water, and don’t let the little ones play in the dirt or long grass  or slide down creek inclines) instead of to a hockey game.  Wouldn’t that be good?      photo by Sue Robertshaw 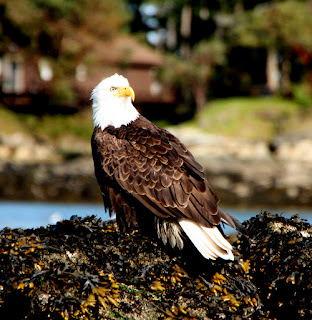 Posted by Betty Krawczyk at 8:28 PM