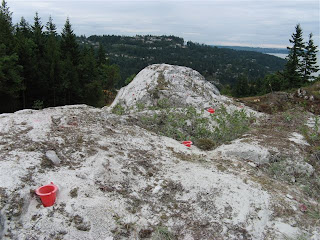 This prayer march is called to honour Mrs. Harriet Nahanee. Harriet is a 71 year old Indian (she insists on being called Indian) from the Squamish Reserve who joined the Eagleridge Bluffs Protest to try to help save what she considered the needless destruction of Squamish Land. Harriet was arrested along with 24 others and declared guilty of contempt of court on Jan. 24 and sentenced to 14 days in prison.

Harriet served 9 days in Surrey Pre-Trial which is a hell hole. Nobody should be sent there, especially a 71 year old residential school survivor woman with underlying health problems. Harriet’s judge, Madam Justice Brown was advised in a letter before sentencing, of Harriet’s health problems sent to her by Harriet’s co-accused, Betty Krawczyk. Madam Justice Brown chose to ignore the contents of Betty’s letter and sentenced Harriet Nahanee to 14 days in jail anyway. While there Harriet contacted pneumonia and is now in St. James hospital fighting for her life. We want to honour this brave great grandmother who has fallen fighting for the right of her family, both immediate and extended, which includes all of us, to save the eco-systems that sustain life. Walk along with us.