HARPER’S FOUR HORSEMEN
The Bible says many things. Among them, Jesus said there would always be poor people (the inference is that we mustn’t get too excited about them). The Bible also says that servants must obey their masters. And that wives must obey their husbands. Sweet. Rich Christian fundamentalists, who literally believe this, get to be kings on earth before they even get to the Rapture part, the point in the final Biblical blood baths (Book of Revelations) where they rise up into the sky with Jesus. Having finally escaped this convoluted thinking that saturated my early life in the US, (my father was an fundamentalist preacher) I now find myself living under the guidance of a Canadian prime minister who also is a member of this fundamentalist Christian club, one who believes literally in the Bible, particularly the Book of Revelation that gave us the Four Horsemen of the Apocalypse (Revelations: 6:1-8).

These Four Horsemen have always made my head ache. The horsemen each ride different colored horses; white, red, black and ashen. And it is Jesus himself who sends these horsemen out to wreck terrible havoc upon the world, especially the ashen horsemen who has death written over him and is given authority to kill (by Jesus) with sword and pestilence and famine and wild beast. Fancy that. Whatever happened to the notion of “gentle savior?” Isn’t this a tad contradictory?

Nevertheless, the story of the Four Horsemen in the Book of Revelations is what fundamentalists believe literally, including Prime Minister Harper. And to buttress up Harper’s belief in these futurist horsemen, he has his own literal four horsemen waiting in the wings. These are the four judges of the Supreme Court of Canada he will appoint in the next four years to replace four retiring judges.

These new judges may be in many respects seem much like any other appointed judges except they will share one mind set because Stephen Harper will only appoint judges who believe as he does. They will perhaps belong to different churches, but will essentially hold very similar beliefs. They will believe abortion to be wrong and will rule against it. They will believe same sex marriage to be wrong and will rule against that too, along with most other rulings on Charter Rights. These are the four horsemen we must fear, not Biblical ones. Stephen Harper’s judicial four horsemen must not be allowed to ride. We must send out our own horsemen of hope and change, and not be dismayed by Harper’s Four Horsemen of death and destruction. And it is our vote on Monday that will halt Harper’s ride. Please let’s do this. Anybody but Harper. 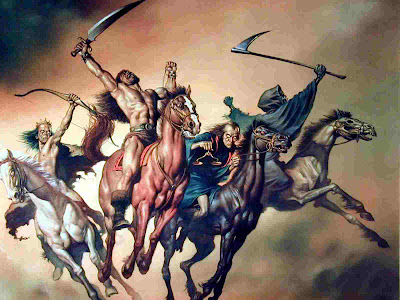