I’m wondering how many mothers must have voted for Stephen Harper in order to give him a majority rule. On the face of it, it’s enough to bring motherhood itself into disrepute.

But things may not be as bad as all that. Harper got roughly 39.6 per cent of the vote (Toronto Star). That comes to approximately 5,829,350 people who voted Conservative. If we say that women would reasonably comprise half of these votes (as women are half the population of all voters) then only 2,914, 675 of the people who voted for Stephen Harper would be female. However, as more men than women traditionally vote Conservative then I think we might knock off another thousand along with the 675 at which point the number of women who voted for Harper would be approximately two million nine hundred and thirteen. Wow. From a population of almost 24 million people eligible to vote, less than three million women voted for Stephen Harper.

But how many of these less than three million females who voted Conservative would be mothers? An accurate percentage would be hard to come by. But what is there in the conservative program that would influence any mothers to vote for them?

Let’s see. Guns, as in Conservative opposition to the gun registry? But women don’t like guns. Except for Sarah Palin who belongs to another country (maybe another planet) and can’t vote in Canada. Military bombers and hardware? Mothers as groups aren’t terribly keen on war, at least less so than men. Wars, like guns, kill children. Fundamentalist religion? Ah, obviously some mothers do like this and raise their children so. But more prisons? Do mothers really feel safer with more prisons when violence is actually declining? When mothers know, as all women know, that violence is more likely to come within or around the edges of the family unit?

I think most of the mothers who voted for Harper came from two camps: one, well off mothers who are financially secure and just want their own children to be secure and can’t think beyond that. The other group belongs to the religious right, be it Christian or Muslim or Hindu or Sikh, most harbor loathing for gays and for women’s reproductive rights. And this group of mothers did not necessarily vote only their pocketbooks, but also for their religious ideologies. In my opinion mothers must move beyond these male constructs of money and religion which offer dissention and division, poverty and pain, class hatred and violence, and take their men and children with them, kicking and screaming, if necessary. Or none of us may survive. Our earth holds us, we stand or fall together. Happy Mother’s Day everybody! 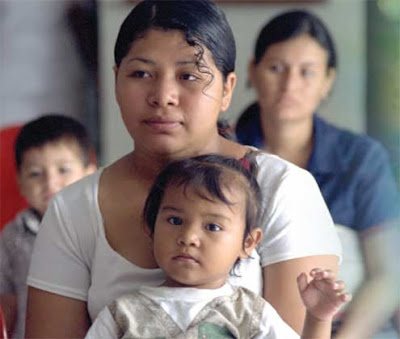 Posted by Betty Krawczyk at 6:11 PM