HAVE YOU BEEN TO JAIL FOR FREEDOM? SHAKE MY HAND!

HAVE YOU HAVE BEEN TO JAIL FOR JUSTICE? SHAKE MY HAND


Have you been to jail for justice? I want to shake your hand

Have you sung a song for freedom? Or marched that picket line?

Have you been to jail for justice? Then you’re a friend of mine … Anne Feeney

freedom from rank injustice. And the injustice coming down on us all, in the

words of another song writer, Bob Dylan, is expressed in his lyrics: A HARD

RAIN IS GONNA FALL. This rain is already falling in the sense of environmental

open. Both of these phenomena are the result of rank injustice perpetrated on all

unfortunately wind up in charge of both global environmental and economic

corporations and banks to continue tearing up the rest of our planet physically,

in the end, also tear up global economies, including our own. In my opinion,

lives in prison (I don’t believe in capital punishment). But we, the swindled ones,

stripped of the surety that our leaders care a fig for us, must learn to swim, or at

least to paddle. One thing we might seriously consider as a paddle is peaceful civil

There are two ways to go with peaceful civil disobedience. One is to attend a rally

where a protest against the rank injustice of social, environmental or economic

depravity being perpetuated upon us all has become too outrageous to bear, and

take part in the protest. If the police appear and tell you to move and you refuse,

you will probably be arrested. If the powers that be (hereafter referred to as

probably be released in the police station with no more than a stern warning.

However, if TPTB feels threatened, or if there is an injunction against the rally

or blockade action you have joined, the process will probably be different. You

may be charged with something like trespassing, or being a nuisance, or blocking

traffic, or you may be charged with disobeying a judge’s order, which is another

name for being charged with Contempt of Court. The most serious is to be

charged with Contempt of Court.

court. However, you can still be released from the police station until the date

you promise three things…to appear for the court date, not to return to the

unlawful conduct (joining other protests or blockades under injunction) until your

court appearance. If you refuse to sign the undertaking (the promises) you will be

held in custody until trial.

What is an injunction exactly and how did the corporation, bank, or government

agency get such a thing in order to dispel a blockade or bothersome protest?

The logging or mining company, Retail Corporation or government agency,

Occupy movement, any citizen’s rally or protest gathering that could turn into a

blockade, or are already under the formation of a citizen’s blockade, can go to

the BC courts, and show cause for wanting the injunction. Our BC courts are the

most conservative and industry friendly than any in Canada. Our BC courts give

displeasure. We have been dubbed the province that governs by injunction.

And you, who as an individual, have joined a protest or blockade group that

is under an injunction, are taken into custody and charged with disobeying a

into Contempt of Court charges are faced with a big decision. If you sign the

undertaking you will be freed until your court appearance. However, by the

very act of signing the undertaking you are in effect, regarded as conquered

by the TPTB. There is no defense against Contempt of Court. It’s beautifully

rigged by the law. You have defied an individual judge’s order. No matter how

evil and destructive the work being done, no matter how gross and disgusting

the company doing the work, that one BC judge’s ruling is so precious that

entire mountains denuded and topsoil eroded and poisoned. And after years of

momentous struggles with monster companies and courts by the people, BC is

now more threatened with environmental destruction than ever before. But if 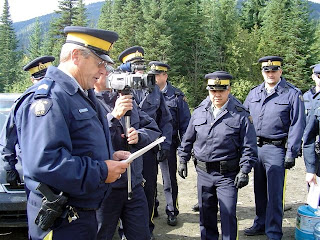 blockade successful in the future? More next time.
Posted by Betty Krawczyk at 8:59 PM