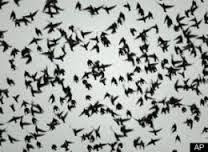 Okay, so I’m a research junky.  I admit it.  But when I first started looking at the honey bee” colony collapse disorder” syndrome, everything pointed to pesticides, especially a group called neonicotinoids. Certainly pesticides are deadly enough to kill even humans over a course of time, much less the tiny bodies of honey bees.  But it was the reported incidences of sudden honey bee deaths that shocked me the most.  The very idea that these wondrous gifts to humans and to the world could be dying suddenly in droves all in one day with no definite explanation still staggers me.  So I continued to search for explanations and ideas from others.  Well, everything is connected, and one thing just naturally leads to another.  Like huge flocks of birds suddenly falling out of the sky, dead as door nails.
At least most were already dead when they hit the ground.  5,000 birds (Red-Winged Black Birds, AP 2/1/2011)  fell from the sky in Beebe, Arkansas on New Year’s Day, 2011, as well as 500 sky falls of dead birds in Labarre, La. on the same day.  And as many as 6,000 dead birds were reported to have washed up on the shores of Georgian Bay in Ontario (AP Oct 23, 2011).   And this from Canadian Press (08/08/13), describing the recent down pouring of dead grackles from the sky in Winnipeg: “Birds plummet from the sky in Winnipeg, startling residents-‘They were dropping dead’.  And just a month ago from England’s south coast fishermen reported thousands of dead gold crests, robins, thrushes and blackbirds dropping from the sky (Herald Sun, Sept.19, 2013).
Enough, already.  But are there any scientific explanations for these phenomena?  Not any that I’ve heard.  Best guesses, maybe. The “experts” in Ontario  attributed the 5,000 mass bird sky deaths to “botulism”. Botulism?  Ever hear of a bird getting botulism?  Or 5,000 birds getting this all at one time?  And dying together, all at the same time? But the English “expert” claimed that the thousands of common migratory dead birds that dropped from the sky in England was because of “fog and heavy winds” as they traveled from Scandinavia.  Still, as reported by the Herald Sun, the expert went on to say…”This is particularly unusual; it’s birds like thrushes, robins and a whole variety of other species that can be very good long distance migrants.”
Fog?  Botulism?  Sounds fishy to me.  And yes, I agree with the English “expert” that this is particularly unusual.  Or seems to be.  So I ploughed on.  And once again, ran smack up against Chemtrails and “climate modification.”  Could the massive honey bee and bird die-offs really be connected in a way we haven’t thought about because so much of government and military experimentation is secret and classified?  Perhaps.  But I did find some information that is extremely controversial and extremely down right scary.  Next time.
Posted by Betty Krawczyk at 3:30 PM