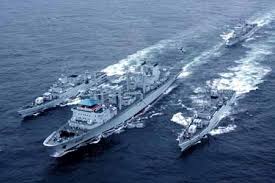 I think China is serious. She is sending a huge warship to the Syrian coast line along with some other ships (Paul Joseph Watson (9/5/2013 Telegrafist.org.). Syria’s coastline is getting crowded.  However, the main sun bathers are the personnel on the war ships.  Aside from the Russian warships already stationed around the Syrian coastline keeping the more numerous US warships company, Russia has also announced that they are sending three more warships to the area.

If Obama has any good sense left he will rethink a strike on Syria in a hurry.  China has stated repeatedly that she will protect Iran.  And China knows that all strikes on Syria are aimed at eventually getting at Iran and ultimately at encircling China.  China knows this.  And she also knows the main reason behind why the Obama administration is so gung ho to make such a big mess in the world, and why Obama doesn’t even care that he is appearing  to have no good sense left even if he started out with some. Did Obama just take a wrong turn somewhere?  Whatever, he has run too far with the devils to turn back now, that is with the neocons and the military industrial complex, Israel and Saudi Arabia, and yes , that other entity bent on destroying the future of the world.  I am referring, of course, to The Conglomeration of World Banksters!
Muslims don’t believe in charging interest.  It follows that the banks in Muslim countries are public, not private banks.  In an article by Ellen Hodgson Brown entitled “Making the World Safe for Banksters” (Information Clearing House 9/5/2013) Brown points out that private banks can’t make money from public banking systems.  Public banking systems have no need for interest rate swaps, credit default swaps, or packaged derivatives.
But it isn’t just the Muslim countries that don’t have private banking systems.  Neither does China.  Or Brazil or Russia or India.  And these countries passionately resist the US and Western central bankers invitations to turn their public banks into private ones for the Banksters to loot.   However, 60% per cent of the world has been caught in the trap of deregulated banking of the private banks.  And that 60% of the world (people in the US, EU, Africa, South America (excluding Brazil) Mexico, Canada, parts of Asia, etc.) now has to deal with overwhelming interest payments on their governments bank loans and the austerity plans imposed by the same banks.  How did this happen?
In her article Brown cites a posting by Greg Palast of evidence that in the late 1990’s US Treasury Officials and Wall Street conceived a plan to open all banking to the lucrative derivatives business.  Brown continues:  …”To pull this off required the relaxation of banking regulations not just in the US but globally.  The vehicle to be used was the Financial Services Agreement of the World Trade Organization.”
So banking regulations that kept some of the worst practices of private banking in line began to eat dirt, so to speak.  But why did the governments of the countries who signed on to this massive global banking deregulation do it?  Why would these countries deliberately put not only their own people at risk (stipulations that customer’s deposits could be confiscated if the banks fell into trouble, i.e. the Bail-In template) but the very idea of national sovereignty?
Brown continues:  “WTO members were induced to sign the agreement by threatening their access to global markets if they refused; and they all did sign except Brazil.”  Brazil was threatened by a boycott for refusing to sign but nothing came of it.  And then, the most hair raising admission by U.S . General Wesley Clark (Ret.) in a 2007 interview on Democracy Now…”Iraq, Syria, Lebanon, Libya, Somalia, Sudan, and Iran.  These seven countries were named by U.S. General Wesley Clark (Ret.) as being “rogue” states being targeted for take down after Sept. 11, 2001. He said that about 10 days after 9/11 , he was told by a general that the decision had been made to go to war with Iraq.  Later, the same general said they planned to take out seven countries in five years: Iraq, Syria, Lebanon, Libya, Somalia, Sudan, and Iran.”
The Banksters are actually doing well as far as scoring.  Libya is down, along with Iraq. Syria is bleeding, but as yet still standing.  The situation may be different with Syria.  Russia and China are both in the area.  Obama may not be so anxious to rumble…especially with China.  We’ll see.
Posted by Betty Krawczyk at 10:27 AM