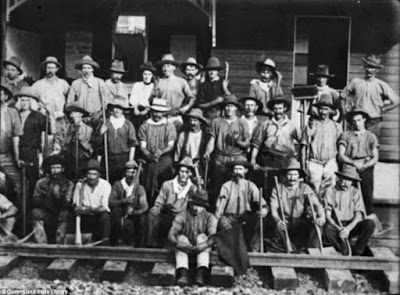 Because it was working class people, both black and white, and immigrants from all over the world  who created the enormous capital wealth in the US and Canada. These men worked like beasts in the mines, in the forests, on railroads and fishing boats, on oil rigs and in the smokestacks.  And now a few generations later these men feel that while they and their ancestors built this wealth, the wealth holders have turned their backs on them. And they have.  The wealth holders, and most of their governments, are more concerned with keeping the wealth holders happy than the welfare of working people.

Donald Trump points his finger at Muslims, Hispanics and women.  And even the women in his
audience applaud his disgusting sexist remarks.  It’s eerie.  But the women can be a threat, too, to their own men’s sense of identity, because the women are usually working, even if at some below poverty wage job.  But we have to try to understand the women’s fears. If their families are being threatened economically, or think they will be, and Trump promises to fix it, they don’t care about feminism.  What is political correctness to them if they see other foreign men who they think are taking (or will take) their husband’s and son’s jobs while they are trying to exist on their own measly below poverty wages?

I think Germany mainly turned to Hitler because he promised to put men to work and also convinced people that the Jews were stopping this.   If we will remember, Hitler rose to power when the country was desperately poverty stricken.  As the winners of World War One, the Allies demanded huge amounts of money from Germany in war reparations. There was hunger in Germany, and massive malnutrition.  Poverty, and fear of it, is always the main driver and breeder of racism. And if times get really tough now, many Canadians without jobs or worried about their jobs, may also sink into racism against any foreign group.  But I think Justin Trudeau, and the people with him, will do their very best to prevent this from happening.  Let’s give him our support.
Posted by Betty Krawczyk at 9:50 PM