Justin Trudeau and the Charge of Treason

Justin Trudeau and the Charge of Treason

With the inquiry into Trudeau’s use of the Emergency Act wrapped up, an old article concerning the possibility of our prime minister being charged with treason began to nag at me. The original idea came from an old article I had filed and forgotten. Fuelled by the dream of finding some way of getting rid of Trudeau early I finally found the article. It was posted on Dec. 20, 2018 by Donna Kennedy- Glans. The article concerned an interview that Trudeau had given to the New York Times three years before when Trudeau was a newly minted prime minister and I quote from Kennedy_Glans article...

“Three years ago, almost to the week, Justin Trudeau informed the world he no longer believed in Canada. ‘Our country will be the the first “ post national state” he told the New York Times. ‘ There is no core indentity, no mainstream in Canada.’

So what exactly did our Prime Minister mean back then when he spoke these words? And does he still think this way? Well, it seems straight forward enough given his actions since the New York interview. Trudeau wanted Canada to be the first nation to become post national. Easy as pie. So exactly what does a post national population look like? Chaos, as there is no nation to speak of, that is, no idea of a common identity with so may diverse nationalities in the population, no common ideas of civil rights, or democracy, simply pockets of leaderless groups of old and new immigrants mostly congregated along the southern border. This reading of Canada’s situation gave Justin Trudeau a tremendous feeling of power.

He is in a position now to play with different groups, pit them against each other, fill them with fear. He can divide up the spoils of over taxation of the working class and give gifts of spoilage to his favourites. First, his personal friends. Then the corrupt press and politicians on the take. and money to squander on personal causes like making the Canadian school system harmonize with it’s woke paedophilia system with drag queens for kids and encouraging kids to question their own sexual identity.

And what do kids think of this? Well, kids are kids everywhere and they probably think it’s fun to keep secrets from their parents and to change the meaning of words so there is no mother or father, no dreary homework with math as they are now being told by their teachers that math is racist, along with all personal relationships. And that the children are responsible for nothing as they, black and white, were born either victims or abusers, and nothing can be done about it.

Our farmers are in dire trouble with new fertilizers regulations that will driver many farmers out of business. The World Economic Forum has urged Trudeau to shut down approximately one third of Canada’s farm land. And Trudeau is compiling. Just as he has acted to keep Canada’s other economic engine under wraps, the oil and gas fields. Yes, we all want pristine air and lands but this has to be done gradually. To do so abruptly with no viable means of transition in place is to court insurmountable human misery and death, especially among the poor. Environmentalism has become like a giant sword, cutting down the poor.

I believe that Justin Trudeau, in spite of his pitiful defences of his policies, has, and is, commuting treason by his betrayal of Canada and the Canadian people through his deliberate policies that threaten Canada and the Canadian people by threatening our food supply and the power needed to grow an economy. He is betraying Canadians by refusing the Canadian Constitution and Bill of rights with the use of the Emergency Act and by refusing to accept the physical and moral care of his people by accepting the guidance and support from an unelected foreign entity known as the World Economic Forum. Justin Trudeau is a graduate of this foreign entity as is half of his cabinet as is his financial minister and Deputy Prime Minister Chrystia Freeland who sits on the board of The World Economic Forum. All members of cabnit who are also members of the World Economic Forum should also be named and known to the Canadian public. Prime Minister Justine Trudeau and Chrystia Freeland should be charged with treason. More on this. 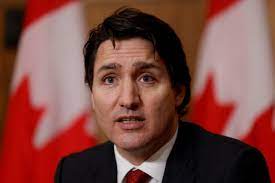 Posted by Betty Krawczyk at 6:32 PM