Christy, Sarah, and the Riot 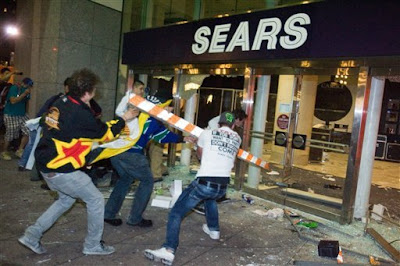 Christy, Sarah, and the Riot

Ever notice the similarity between these two right wing women? Christy Clark and Sarah Palin? Neither like other women, at least those engaged in actually working to benefit the community, such as nurses and school teachers (yes, I know men also work in these professions.) Both Clark and Palin try to project their love and concern for families in general in their rhetoric, but in practice most of their love goes to rich families. Still, these are two tough sounding ladies. Especially tough on crime. While Christy Clark hasn’t as yet flourished her rifle (if she has one) over her kill as does Palin, Clark can sound just as tough. Consider her “you-can-run-but you can’t hide” threats to the street rioters after the big lose.

Deservedly so? Yes and no. Am I being soft on crime to point out that young people ape the adults in their society? In every society on earth? Game night you had a bunch of young males (yes, a few females were involved ) who have a dearth of alpha male models of honesty and altruism to ape. Young people can be very idealistic; they yearn for good lives. Young men want to identify with something that will contribute to their growing sense of masculinity. They are searching for what it means to be a man. The only place they have to look is to the other men around them. Of course they recognize there are many hardworking honest men everywhere. But in a highly individualist and competitive society young men also recognize that honest, hardworking men are not necessarily rewarded fairly for their efforts. And they look up to men who know how to win. They have been taught by male culture that winning is everything? This makes everybody, especially young men, emotionally skewed. But where did they get this idea only winning counts?

From the adult alpha males (and females) in their world who consider losing anything important a humiliation not to be endured. And we heard this message constantly from the media leading up the game. Just the expectation of winning was front page news for many weeks before the game.

The message that came unremittingly from the media, politicians, and business leaders was that hockey was the thing that held Canada together. All of Canada was involved. This was it. We just had to win. We were bound to. All the important people said so. Obscene amounts of money were poured into this game. The testosterone in the air was palpable. Many young males identification with the hockey players became complete. And then our hockey players lost. Which meant many of the young men felt they had lost, too. This was not only a national disgrace, but a personal one. The high expectation, fueled by alcohol, turned to anger. Against whom? I believe their anger was, at bottom, directed against a society that betrays them at every turn. How so?

By expecting young people to be better than the adults around them. Christy Clark sounded like an avenging angel of the Lord out to skin these young people alive. But my belief is that she projected such outrage because she knows herself to be a plunderer and a coward. If she were not a coward she would order an investigation into the BC Rail fiasco. She would want to explain fully to the public why Basi and Verk were given 6 million dollars in return for their agreement not to name the higher ups in government they claimed had given them the orders to commit criminality. Could that be because Christy Clark was the deputy premier of British Columbia when the deals surrounding the BC Rail sale were made? And that she knows very well who the higher ups were because she was one of them? And is this the real reason she wouldn’t come out and debate David Eby during the bi-election? Because she dreads any pointed questions about the BC Rail sale worse than she would a coiled rattlesnake? I think so.
Well, Christy Clark, carry on. But those words “you can run but you can’t hide” directed toward temporarily out of control young people may come back to haunt you.
Posted by Betty Krawczyk at 1:52 PM