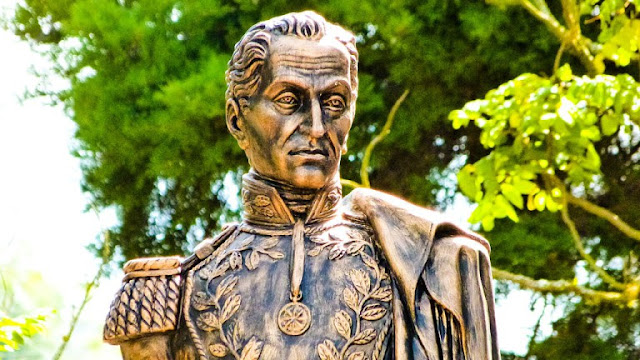 The reason the disenfranchised in Venezuela cling to Maduro is because they feel they can trust him – he is one of them. Maduro is a Mestizo Venezuelan, that is, he is from a group of people that are a combination of European, Amerindian, and African ancestries decent.  They are the largest group in Venezuela and the poorest.  The other prominent, but smaller group, is composed of people who are called Creoles.  They identify as Europeans, or primarily identify with their European descent. The Creoles led the revolution that led to the expulsion of the colonial regime from Spanish America in the early 19the century.  Prior to the Bolivarian Revolution they were considered second class citizens. Yet after independence (including Mexico, Peru and elsewhere), Creoles entered the ruling class. “They were generally conservative and cooperated with the higher clergy, the army, large landowners, and, later foreign investors”. (The Independence Movement).

Simón Bolívar, who began the Bolivarian Revolution, was a rich Creole.  However, he had the good fortune to become acquainted with Alexander Von Humboldt, a German scientist who first began to recognize that the earth was one living eco-system and wrote volumes about this. Contemporary author Andrea Wulf, in her book The Invention of Nature, talks about how Bolivar had always been attuned to the power and beauty of nature, especially the natural wonders of his home country of Venezuela.  It was through the love of nature in his homeland that Bolivar began to love the Mestizo people who he recognized as being terribly enslaved and mistreated in the Spanish colonies of South America. He decided to do something about it.

Bolívar began what became known as the Bolivarian Revolution.  It was a fight for freedom and justice, a fight to end slavery of all kinds.  The revolution spread through many regions of South America, and by the end of 1819:

“Bolivar drove his entire army with single-minded determination from Angostura across the continent towards the Andes to free New Granada. His troops consisted of Paez’s horsemen, Indians, freed slaves, mestizos, creoles, women and children…  There were also many British veterans who had joined Bolivar at the end of the Napoleonic  Wars when hundreds of thousands of soldiers had returned home from the battlefield with no  jobs or income…..In December Quito  and Venezuela joined new Granada to form the new Republic of Gran Colombia with Bolivar as President.”  (Wulf, 2015)

This history of class and race struggle lives on in Venezuela. Juan Guaido, who is Creole, has called for privatization of Venezuela’s oil for foreign investments (US) and for these same foreigners (again US) to came and invade his country and change him from a make-believe to ‘official’ president. While Simón Bolívar was able jump out of the class and race he was born into, and was able to identify with the Mestizos and Blacks, Guaido only identifies with the elites, the rich and powerful.

Guaido and his financial backers care so little for their country that they invite foreigners  to invade their country and to use whatever force is necessary to install Guaido as their president even if this means sacking the entire country.  Maduro and most of the people who fight for and with him understand they are fighting for the very sovereignty of Venezuela.  I think many of these people are also driven to stick with one of their own, by their mutual love of place, of country, their homeland, of their breath-taking forests and mountains and rivers.  Most of Guaido followers willing to sell out their homeland seem to connect primarily with power and wealth.  They have already indicated, through their leader, that they are willing to privatize the oil of Venezuela and put it in US hands.  They, of course, would be rewarded handsomely and have reassurances they would still have their Mestizo servants. We will see who wins this struggle. In the meantime, Canada has set our course along with the oil-hungry Americans and rich elites of Venezuela who want to crown their leader, Juan Guaido, with the gold and silver they have stolen from the labor of the Mestizos.

Posted by Betty Krawczyk at 1:38 PM