A state of emergency fuelled by the fires of hypocrisy 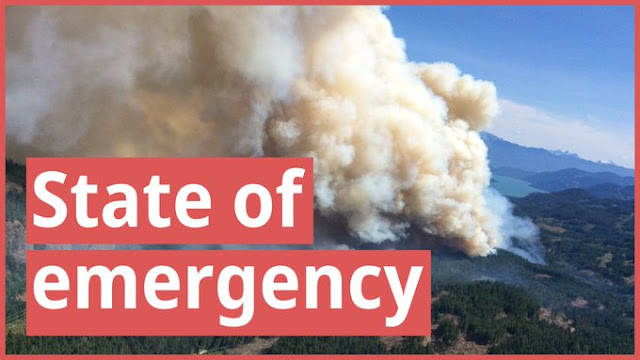 BC has declared a state of emergency due to the rapid spreading of provincial wildfires. Because people will be preoccupied with the physical safety of loved ones and animals, this may not be the best time to try to carry on a conversation about why it is that this situation even exists. On the other hand, maybe it is the best time. My basic thesis is one of the biggest reasons is because of gross mismanagement of our public forests. Why can’t this be stopped?

In my last post I talked about the role of The Attorneys General in Canada, their main duty which to make sure that all accused are given equal treatment in the courtroom governed by the Canadian Criminal Code. However, all BC Attorneys General, including our present one, have chosen to ignore this duty. In this post I want to shine a spotlight on the majority of lawyers who flood into the courtrooms when environmental protesters are brought into court.

First off, I do not disdain lawyers in general, just most of the ones I met in the BC courtrooms during my dozen years of being dragged through the system. There was one shinning exception – Cameron Ward. Cameron Ward is kind of a hero to me. He represented me in some of my appearances, always pro bono. Other times I represented myself. The difference between Mr. Ward and the others was that he believed in our mission, those of us who blockaded again and again, desperately trying to break the courts determination to only use injunctions to arrest environmental protesters. Mr. Ward’s arguments were well reasoned, well researched, with many authorities recited against the use of injunctions in environmental disputes. His arguments would have swayed any court who was not hell bent on stopping civil disobedience at any cost. But why did most of the lawyers appearing in cases of civil disobedience cases that I knew of, behave, in my opinion, so poorly?

Let’s consider. First, all lawyers who step into the courtroom for trial instantly become Officers of the Court. This means they must take direction from the judge. Thus, when it is a judge’s order that was broken that is at stake, the judge is by definition prejudiced against the arrestees who are accused of such disobedience. This is a conflict of interest to start with. However, this is never discussed even as everyone knows what the outcome will be. How does everyone except the arrestees know the outcome? Because the judge knows. He or she will find the arrestees guilty of contempt of court regardless of their arguments. The BC justices hold contempt of court to be a higher injury to the judicial system than attempted murder. You think I’m being melodramatic? I’m not. You will be assured of a jury trial if accused of attempted murder because you could be facing more than a year’s imprisonment. Anyone facing a year or more imprisonment is afforded a jury trial. The Criminal Code says so. Yet midway in what became something of an obsession with me to try to stop the use of injunctions for environment disputes, my civil disobedience charges were raised to Criminal Contempt of Court meaning that I faced the possibility of a year or more in prison. I was still denied a jury trial.

As a lawyer, you know the judge is not going to rule on anything except whether the defendant was or was not in the zone covered by the injunction. As a deliberate act of civil disobedience of course your defendant was there. They meant to be there. That’s all the proof the Crown and the judge actually need. The defence lawyer – everybody – knows how it will end, but still, it is a job for which he or she will be paid, so therefor will offer up a few feeble objections to the Crown.

This system, along with the climate crisis, has directly contributed to the wildfires that are turning us into another Haiti...baren mountainsides and flooded valleys. Unless we do something. This is not a democracy of the people, for the people. It is time for us to gather – particularly women – and say NO MORE. Otherwise the only legacy we are leaving for our children and grandchildren is the knowledge that we let the flames of hypocrisy burn on our watch. Nobody is going to put out those fires except us.