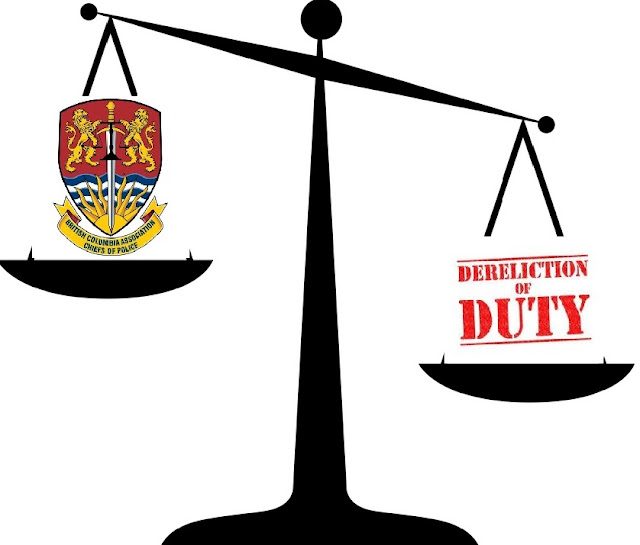 What do BC Police Chiefs have to do with the wildfires which are currently burning with a vengeance? Why am I so angry at them as I evidenced in my last post?  And why do I say they are not doing their job where protests are occurring in our forests?  Because BC Police Chiefs are not doing their jobs. They allow the BC Court System to do their jobs for them to the point dereliction of duty.

What exactly am I talking about?  Most people by now know that when there are environmental protests in the woods blocking logging actions, an injunction sooner or later comes down from BC Courts and the police go in and arrest the protesters. Isn’t that what they are supposed to do?

No, it is not. The police are supposed to take any lawbreaker into custody as soon as they find someone breaking the law. When the first protesters appear and physically impede or seek to impede the work of a licensed company, they are breaking the law and should immediately be arrested and taken into custody as any other lawbreaker would be. That’s the law.  And when the police do not arrest lawbreakers immediately, but instead are ordered by their Chiefs to stand down and wait sometimes days, weeks, or even months for a court injunction, the Police Chiefs are acting outside the law. The law is the Canadian Criminal Code.

People sometimes ask if what I am proposing (immediate arrest) would make things worse for environmental protesters in court. No. It would make the protestors’ court appearances profoundly better.   When one stands before the court to answer to a ‘coded crime’ one is under the protections of the Criminal Code.

When arrested by injunction, discussion of these motives are neither allowed nor recognized by the Court. The only focus is on whether the defendant ‘broke’ the judge’s order (the injunction). Nothing else. The environmental arrestees are left standing naked before the court, unclothed by the rights of the Canadian Criminal Code which should be due every Canadian. Arrest by injunction takes the onus off the forests, logging companies, clear cutting, and the trashing of the forests to a single judge’s order that was broken. But there are possible alternatives to being a helpless blob.

If protestors are arrested under the Criminal Code, they can build a case around the rules of justice by using the argument logging companies are renters (paying very little at that). This is not the same thing as owning the forests and doing what they choose. It is not the same thing as being given the rights of private property as they, and the courts, seem to interpret tree farm licences. I think there is a very reasonable argument to be made that clear-cutting destroys the forests and no judge should allow a renter to completely destroy the property of the landlord and put an entire neighbourhood in danger.

We need to be protesting not only the cutting of the forests, but also how protestors are arrested.

Individual policemen are not responsible for this muddled and horrific state of affairs. They do what they are ordered by their Chiefs. We the public, along with First Nations, are the landlords of the forests that are described as “public” forests, with the acknowledgement of First Nations original and still unceded ownership. This means that we also have the responsibility to identify those who are culpable in this destruction of public property. Those who willingly hold up the perversion of law in the name of law, are in dereliction of duty, ironically in the name of duty. And this dereliction includes not only the BC Police Chiefs but also the BC Attorney General. Next time.