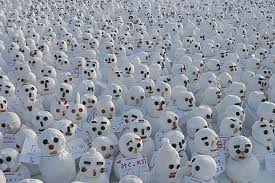 Genetically Modified People?
Impossible?  Improbable?   Last year I would have said so.  Now I’m not sure.  Consider:  we already have genetically modified salmon ready to make their debut in BC fish farms.  Actually, the fish (dubbed FrankenFish by US media) are already here.  FrankenFish were born in Canada at Memorial and Queens Universities in 1996 and according to Biologist Bob Devlin, many are living in West Vancouver under big, white tents across from Marine Drive. Bob Devlin studies and cares for the FrankenFish. In an article featuring Mr. Devlin in the North Shore News (March, 2011.)  Mr. Devlin neglected to mention that the FrankenFish is patented.
Exactly what is a FrankenFish?  In this case an Atlantic salmon that has been grown from eggs that were injected with additional genes from an eel and Growth Factor IGF-1. They can grow to ten times the size of an ordinary salmon, still containing unknown quantities of IGF-1, a hormone that has been linked to early sexual maturation of human children.  A company called AquaBounty (US based) has a patent on this genetically modified salmon which is the very first animal to be genetically altered and then patented like corn and canola.
The Harper government won’t even tell us what GMO foods are in our groceries and even if we knew, a patented salmon is a very big jump from a patented ear of corn.  But a patented genetically modified pig is not such a terribly big jump from a patented salmon as both are animals.  The FrankenPig already has his papers (Revivcor) and is waiting his turn to be officially tested for market.’
As horrible as this seems the worse may be yet to come.  In my opinion, given the power of the super rich and the super right wing, it is not inconceivable that the genetic modification of humans is also in the not too distant future.  Not for food, of course.  And not even, like robots, to perform repetitive or onerous tasks that most humans shrink from performing. What is it that our medical establishment is constantly calling for that is in very short supply?  You guessed it, human body parts.
Human body parts are in constant demand, especially by people who can pay big bucks for them, legally or illegally.  Human eggs can be genetically modified in the Petri dish as easily as salmon eggs and grown normally in the wombs of poor women in return for food for the women’s hungry families.  How could genetically modified humans be engineered to benefit corporations?
FrankenPeople could be sterilized in the Petri dish, like FrankenFish, kept clean and healthy, and have extremely small brains.  When called upon, FrankenPeople would perhaps have several operations to remove various body parts before they would die from the operations, or be killed, humanely of course, having served their purpose.   FrankenPeople would never know they were created only to serve as body parts primarily for the corporate elite.   And the rest of us?
Would we be persuaded that FrankenPeople might be okay in case we needed an organ transplant for a loved one and had the money?  A lot of money, of course, because the patent holder of FrankenPeople wouldn’t sell their items cheap. After all, they would argue, even though the processes of modifying FrankenPeople might have been engineered in public Canadian universities as was the FrankenFish, the holders could claim they invested enormous amounts of money in bringing FrankenPeople body parts to market. Science fiction? I’m not so sure. We have allowed patented genetically modified corn and grains without revolt.  Patented genetically modified salmon are already on our shores. The patented pig is next.  At what point do we as citizens refuse to cooperate with a sick and deranged economic system that doesn’t even realize how sick and deranged it is?  Where is that point? Sweet mother of us all, where is that point?
Posted by Betty Krawczyk at 12:46 PM