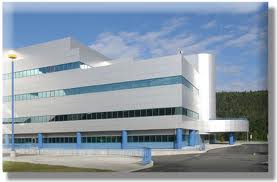 Monsanto also loves, besides two very important universities, the Canadian Department of Fisheries and Oceans, and one huge Frankenfish corporation named AquaBounty.   The FrankenFish (genetically modified salmon) was in fact, born in Newfoundland, at Memorial University in 1996. Two Memorial based  researchers, Garth Fletcher and Choy Hew, worked to create this fish that does not exist in nature, along with Peter Davies of Queen’s University in Kingston, Ont. (St. John’s Telegram: Jan. 24, 2011.)
This work on genetically modified salmon was protected by Memorial University and Queen’s with the final patent coming in 1996.  At this point what had been a publicly funded venture became a totally private firm under the name AquaBounty Technologies, complete with a birth certificate in the form of their own private patent . But I would like to know how many people connected with these two universities now have stock, or stock options, in AquaBounty?
So we have two prestigious universities (Memorial and Queens) that took Canadian tax payers’ money to boost along and become part of an exercise that was secret, entirely corporate driven, without proof that genetically modified salmon (or other modified fish) did not pose a threat to the public health of Canadians or would not escape to breed with wild fish.   But this is only half the story.
The part that is really creepy concerns the patents for these genetically modified salmon. Enter Monsanto. And the US Food and Drug Administration.  That’s where the battle to certify Frankenfish is being fought.  And Canada?  Where the US goes is most certainly where Canada will go. And guess who will be sitting in advisory positions to the US government upon application for approval?
For one, Michael Taylor, the US Food Safety Czar.  He was previously an attorney for Monsanto. He was influential in getting other genetically modified foods approved. Another adviser to the US on Frankenfish is Alison Van Eenennaam.  She used to work for Monsanto. And also advising will be Kevin Wells, who works for a company named Revivicor, that is genetically engineering pigs (this from Jeffery Smith ,Natural Grocers.)  And the answer from the FDA will be coming soon enough to our markets.
Canadian companies don’t have to label genetically modified food.  Wheat, corn, soy beans, we don’t really know what we’re eating.   And if the AquaBounty application is approved the flood gates will open wide like gaping jaws.  We won’t know when we could be eating FrankenFish, or FrankenPork, for that matter. But we should be acutely aware of one thing…the most evil of all corporations to ever to come into being may very well wind up with most or all of the patents on all genetically modified salmon, and when escaped GM fish (by accident or design) mate with wild fish, Monsanto can claim they own all, or most of, the salmon in the seas and rivers.  And make the claim stick.  Harper’s new conservative judges (four new ones, a majority before he leaves office) will make sure it sticks in Canadian jurisdiction.
But AquaBounty isn’t the only worry.  For twenty years, FDO researchers in BC have been experimenting with, and using sex hormones to satisfy fish farm demands for all female salmon in their pens.  And not stopping there, our DFO fish scientists, along with BC governmental approval, have stocked a large number of our lakes with these sex changed and sterilized fish.  Continued…

Action is the Mother of Hope
Betty Krawczyk
Schiver Rhodes Publishing
www.schiverrhodespublishing.com
Posted by Betty Krawczyk at 11:29 AM