TIME TO RETHINK PRIVATE PROPERTY
With our economy tanking in tandem with the US, and the Canadian environment turning to slush, I suggest, without shame or reservation, that we take a good look at where reverence for private property  has led us, and is leading us.
I’m not talking about private homes, family farms, cars, trailers, boats, vacation places, small businesses or private money in the bank.  I’m talking about the right of large multinational corporations to own and destroy large swaths of our physical environment at will, even if this destruction affects hundreds, thousands, even millions of other people and other species.  Logging companies do this by clear cutting large tracts of forests, both public and private.
These forests can include watersheds that feed into lakes and rivers and reservoirs, waterways that can flood valleys below during the rainy season following the clear cutting of forests above.  A classic example of this is a final report that was delivered (August 16) to the Comox Valley Regional District by Northwest Hydraulic Consultants.  This report concerned the serious flooding in Courtenay the past few years involving the Tsolum River.
The Comox Valley Record reported on the Courtney council receiving the report  (August 19) but didn’t mention that TimberWest Forest Corporation paid for the investigation, in part, into how their logging practices may have contributed to the flooding in the valley for the past two years.  Isn’t that interesting?  We have a situation where a logging company under suspicion funds, in part, the investigation of Courtenay flooding and the main local paper neglects to mention this. At least the Comox Valley Echo mentioned that TimberWest owns two thirds of the Tsolum River’s watershed and that the assessment itself was based on information particularly given by TimberWest.
Heavens to Betsy!   Do they think we are all as dumb as sticks?  They must.  But what is wrong with us that we stand for such nonsense?  TimberWest has one of the worst environment logging records on the books.  They clear cut to the bone.  And they are heavily into raw logs.  And I don’t think I have to tell you where our raw logs are going.  You’re right.  To China.  Why China?  Well, it isn’t just because the US housing market has slowed to a tear drop.  It’s because China forbids clear cutting in its own country.
That’s right.  Since the massive floods in 1998 that killed 3,000 people and destroyed 22 million acres of farmland China has rethought the practice of clear cutting.  And banned it everywhere in China.  And, would you believe…there is no longer any cutting of any kind in China’s old growth forests.

China has stopped clear cutting her own forests, because she can effectively clear cut ours. And in the process also provide her people with employment by milling our raw logs over there.   China learned her lesson from the massive flooding of 1998 and the lesson was this…go clear cut somebody else’s forests.  Pick out a corporate ridden country like Canada that obviously doesn’t care about their forests, their wild animals, about flooding, about their people. And China would be right.  Our governments don’t care.  And because they don’t care, they shouldn’t be in charge of our forests. And large private logging corporations shouldn’t be in charge of anything.  They shouldn’t exist.  Not even on private land.
Oh, yes.  The report filed by Northwest Hydraulic Consultants that was paid, in part, by TimberWest and based on information particularly from TimberWest, said that heavier rain was the cause of the Courtenay flooding, not TimberWest clear cutting. Surprised? 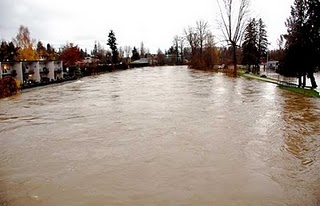